For all my repeated criticism of the man, over many years, that is not a sentence I ever thought I’d write.

But here we are.

They are secret, because their uniforms are unmarked, and they have apparently been pulling people off the street into unmarked vans in Portland.

Now, he’s sending them to cities like Chicago and Albuquerque, because he sees his best shot at re-election dependent upon an uprising of Red State voters, who fear for their lives.

(By implying that urban chaos will soon be coming to their small town or cluster of farms.) 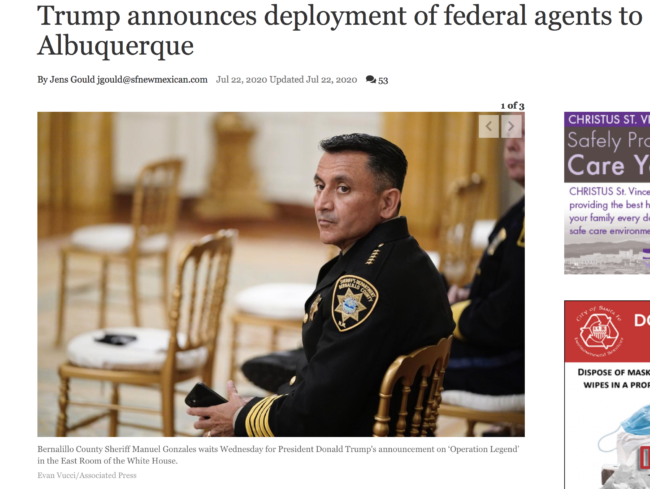 How did we get here?

One of the biggest causes of our national decline over the last 4 years has been the language of dehumanization.

It began during the 2016 Presidential campaign, in which Trump was willing to use name calling, and nasty language, in a way that no “normal” politician ever had.

Whether calling Mexicans rapists, insulting a Muslim Gold Star family, or saying, of Republican war hero John McCain, “I like people who weren’t captured,” Trump’s insult comic schtick was entertaining to a certain type of American, and it propelled him to the White House. 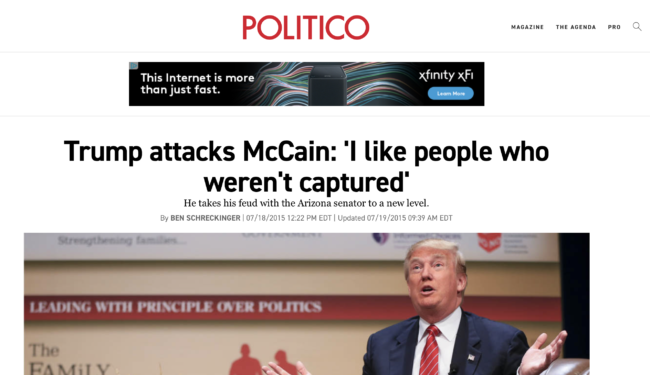 Whether or not a person likes Trump, and supports him politically, I doubt there are many, if any, Americans alive who would suggest he has attempted to unite the United States at any point in the last 4 years.

I’ve written about Divide and Conquer before, but really, it’s not a theory: it’s happening in real time. He has attacked cities, and “Blue” politicians all along, while denigrating minorities, banning Muslims from entering the country, jailing brown children, and defending White Supremacists.

And it’s worked so well that liberals are turning on each other by fighting over racial and/or gender-based lines, often trying to takedown those who don’t conform to a specific set of beliefs. (Making it that much easier to be conquered.)

Years of calling people libtards and fascists, thugs and gestapo, and now we find ourselves in #2020, with one faction of the country aggressively risking the health of others over a belief in science, and people who label themselves as Anti-fascists are being deemed fascists by others.

Everyone keeps calling the other side “they,” and there is serious risk in that, as “us” only refers to “our” side.

And the words that Trump encourages, which make people less than human, (as the Nazis did,) make it that much easier to treat people as less than human.

To risk giving them a deadly disease, because they’re just Blue Staters anyway. (As when conservative Texans come to Northern New Mexico and refuse to obey our laws around face coverings.)

We find ourselves at a crossroads, where protestors believe they can engage in destructive behavior, because it’s justified against Trump’s evil, and then he responds by sending in federal police, (because the military already refused, after the Lafayette Square debacle,) and we all sit here, holding our collective breath, wondering what will happen next?

I used the phrase “takedown” a few paragraphs ago, but really, how many of you know where it comes from?

It’s a wrestling term, now utilized in BJJ and MMA as well, in which one person attacks the legs and waist of another person, and then either trips or throws them to the ground.

(Including the vicious body slam.)

I have both executed single and double-leg takedowns, and been the recipient of them, and they are violent as hell.

It’s a real thing, and another example of language migrating from the literal to the metaphorical.

I mention it here, though, as I just finished binge-watching “Kingdom” on Netflix, and cannot emphasize enough how good the show was. 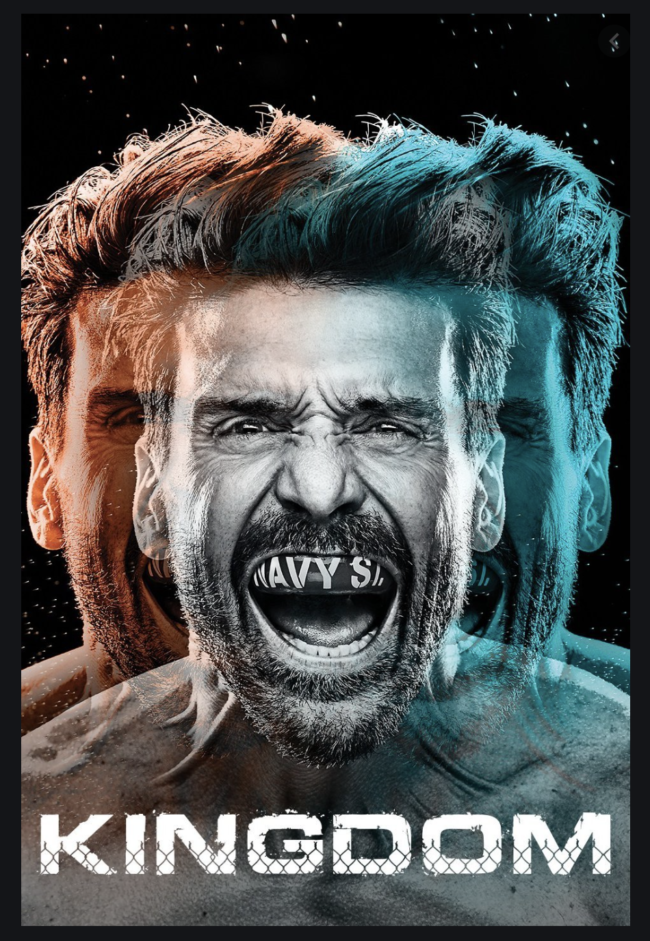 It is set in the SoCal world of MMA, (in Venice, where I almost moved in 2001,) and ran on a DirectTV streaming platform from 2014-17, which means that pretty much no one saw it.

I became aware of it in 2017, when I was doing some research on the actor Frank Grillo, but lacking DirectTV, I couldn’t watch it, and promptly forgot about it.

As soon as it came to Netflix this month, I jumped at the chance, and have rarely seen a better example of storytelling and acting fused together.

Because it’s a show about fighting, featuring very talented but not super-famous actors, (Like Grillo, Matt Lauria from “Friday Night Lights,” Kiele Sanchez from “The Purge:Anarchy,” Joanna Going from some 90’s movies, and the brilliant Jonathan Tucker,) I’m pretty sure most people would dismiss it as pulp entertainment without giving it a second thought.

However, like other superlative genre fare before it, (“The Wire,” “The Sopranos,”) Byron Balasco, the creator, managed to tell real, human, empathetic stories in a way that mesmerized, perhaps BECAUSE of the limitations of his genre structure. (To be clear, I’m not saying it’s as good as those TV pantheon shows.)

And I read in an interview that they were pretty much left alone, to do what they wanted, which comes across in the creative freedom they expressed.

It was just so good. (Though I’m pretty sure if it were shot in #2020, they would have a more diverse cast.)

One core message that comes through, again and again, is that fighting is a mentality, not just a sport.

Some people are trained to fight, and are often born into families that reinforce it.

(Like Trump, according to the new tell-all by his niece Mary Trump.)

Fighting perpetuates itself, and it requires a tremendous amount of discipline to not fight, when the situation presents itself.

For example, I recently came through the most difficult period of my marriage, as we diagnosed my wife with clinical depression in late-March, and were told the recovery would be rocky.

In the beginning of July, my wife went through a rage phase, where all sorts of repressed anger came to the surface, and for a few days, it was all directed at me.

Despite the fact that I was her support system, and she credited me with saving her life, I had said unkind things during the late stages of her illness, and the beginning of her recovery.

I used nasty words, thinking I was justified, because of the hurt her illness caused, and she did not call me on it.

But clearly, it was not.

When her anger finally flared, it was palpable, and scared the shit out of me, causing anxiety attacks.

With the help of some very good friends, (you know who you are,) we got through it.

But the key moment was when my amazing friend Ed advised me that the only way to break the cycle was to not bounce the anger back to her.

Not to absorb it into my body, which would make me sick, but to essentially channel it directly into the ground.

To admit what I said, apologize with kindness, and then not aggress back.

We never mentioned Jesus, at any point, but really, it was the theory of turning the other cheek.

And as a martial artist, I’m familiar with the concept of getting power from the ground, so the idea of sending this energy back into the ground, rather than rebounding it, made sense to me.

In the weeks since, two readers picked fights with me, in emails responding to my column, and in each case, I used the same strategy.

Rather than perpetuating the anger, and participating in a fight, I refused, and responded with kindness, respect and peace.

It was clear that in each case, the other person was taken aback, and a bit frustrated that I chose not to engage in a disagreement based upon anger, but it defused the situation, and that was that.

On a macro level, that’s essentially what Americans need to do, if we’re going to heal from the misery of the Trump era. (If, god willing, he loses in November and moves on.)

We will somehow need to find the common humanity between political parties, between urban and rural, between cosmopolitan and sequestered.

The alternative is that we eat ourselves, and then eat each other.

Here’s what it looks like when you respond to anger with anger.

For example, last week, I saw a tweet by my colleague Jörg Colberg, which drew attention to an Instagram spat involving the renown SoCal artist John Divola.

Apparently, William Camargo, a Latinx artist from Orange County, made a post about an image he shot that was a satire of, or homage to, or derivation of a series by John Divola, who’s from just up the way in Venice.

It references a series I’ve written about before, as I was lucky to interview John twice, for VICE and the NYT, and have spent time with him in person as well.

In fact, he gave me a copy of the book, which is named after the series: “As Far As I Could Get.”

Divola is known for conceptual rigor, and humor at times, and constantly wrong-footed me during our interviews, (another fighting term,) because his vision of what his work was about was always different than my expectations.

In this series, he set up his camera in the isolated California desert, set the timer, and then sprinted away from the camera, to see how far he could get before the shutter clicked.

I think it’s funny, as it speaks to a certain futility of the human condition. 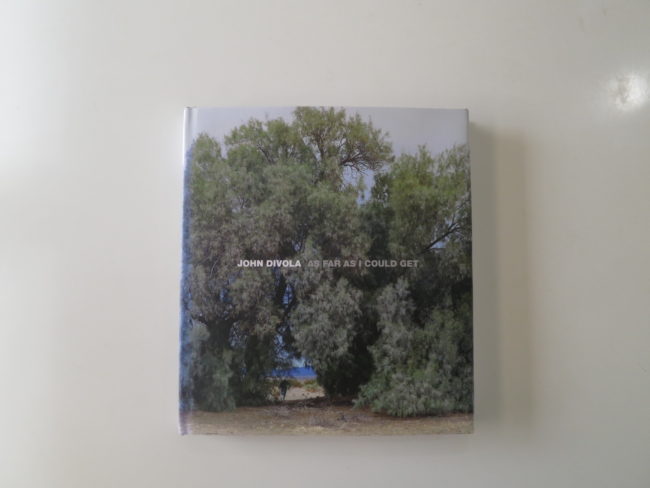 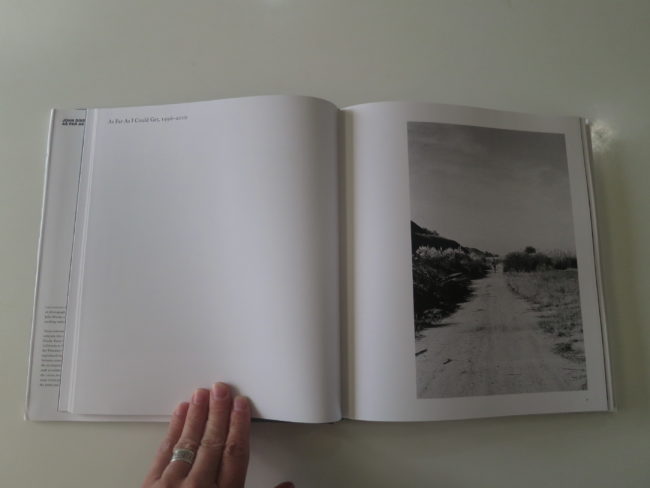 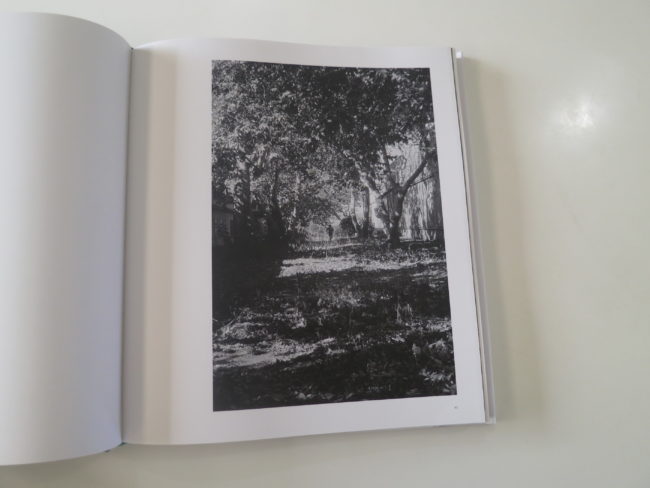 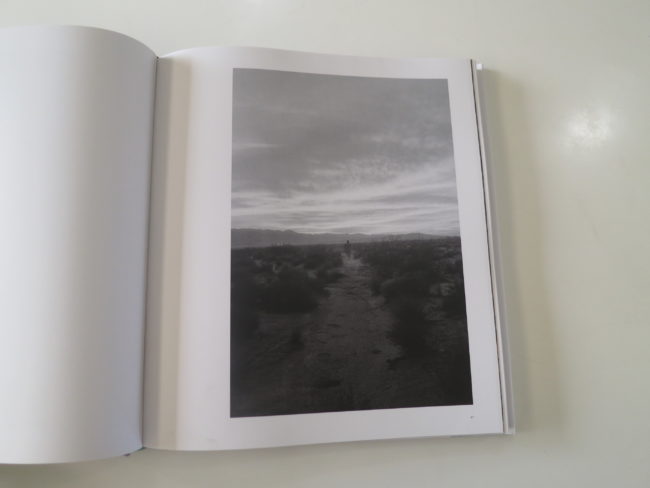 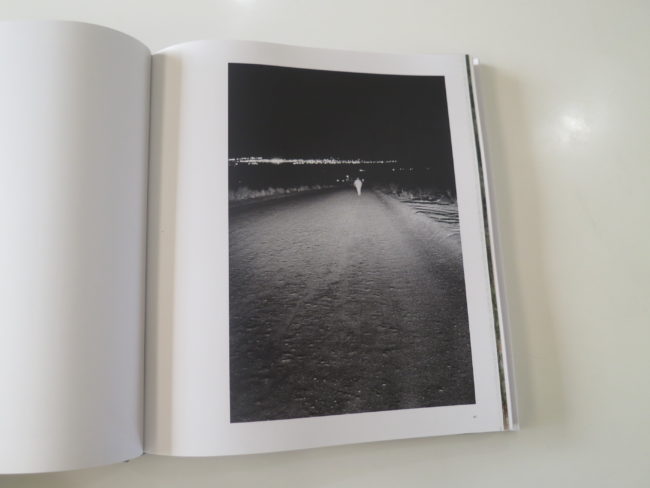 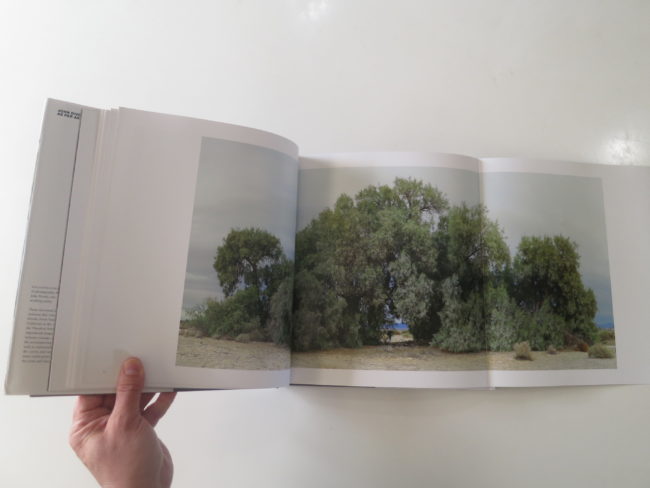 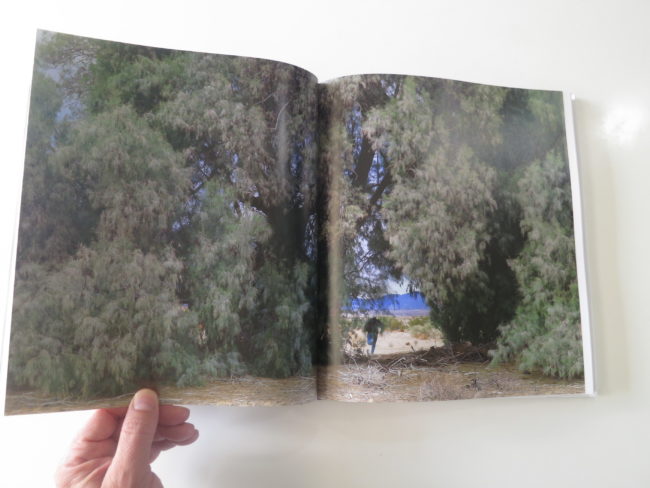 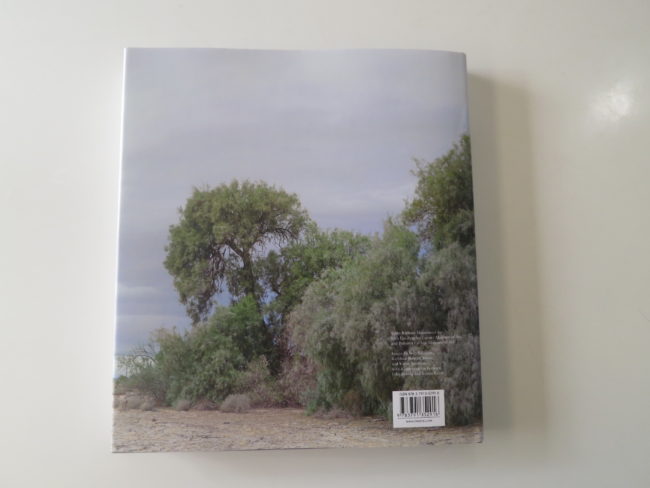 Over time, as he aged, he would presumably cover less distance, but it was always a strategy, and done in an empty desert locale.

William Camargo, the artist who satirized him, set up a scenario in which he tried to see how far he could get from the swap meet parking lot to the liquor store, in ten seconds.

Seen by itself, I thought it was a smart update, an excellent photograph, and by re-contextualizing the scenario, was a takeoff on John’s idea, rather than a ripoff.

But in his caption, he tore into John for the fact that running is a sport of white privilege, and misrepresented the structure of Divola’s project. 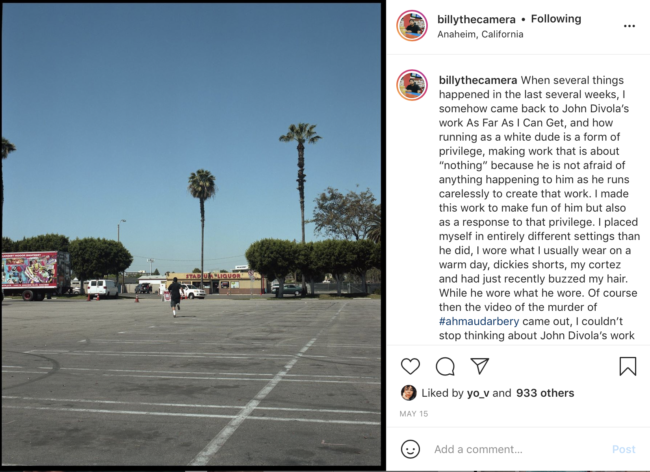 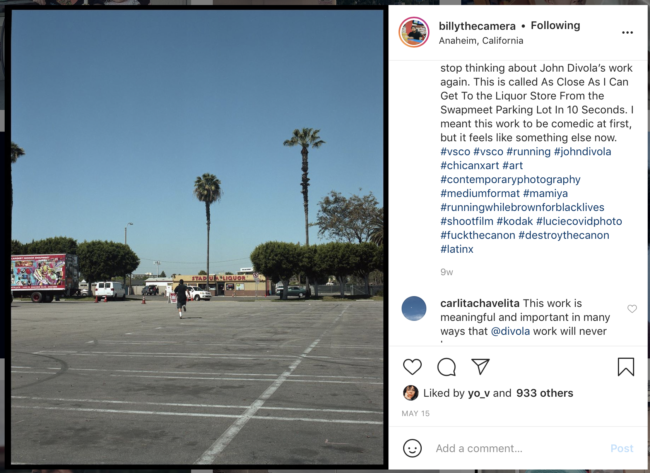 William Camargo, who is a part of Diversify Photo, and espouses the language of the current progressive movement, chose to insult John Divola, who is white, in a public forum.

Isn’t it possible to draw attention to the fact that in certain communities, it is not safe to run, (a la Ahmaud Arbery, who’s mentioned,) without the concomitant need to attack someone else?

Especially when Divola’s work was not actually about jogging?

I get that it is fashionable at the moment, to “takedown” old white guys, (I critiqued Martin Parr last year, don’t forget,) but it was not the Instagram post that got John Divola in hot water.

It was his reaction.

He responded with anger, and put words in writing, in public, that looked really, really bad in #2020. 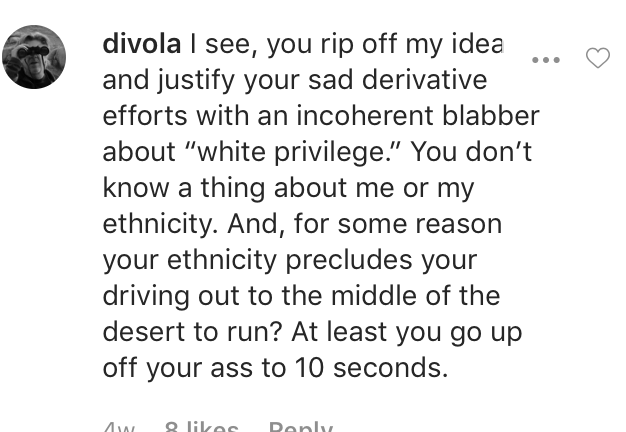 Indubitably, I am not defending what he wrote.

In fact, I just spent a whole bunch of words suggesting that letting anger go by, rather than fighting back, can be transformative.

(Not always: AOC was totally right to defend herself from that Florida man’s awful comments.)

But the glee with which some people then further attacked John Divola, as if it proved that all old white guys are unhinged, was equally unsettling.

And that is my final point for today.

If we on the left refuse to see the value of others like us, creative, passionate, liberal people of all races and genders, than how will we ever help heal these rifts with the rest of America?

Do we expect other people to do it for us?

(And there I go using “us” again. It’s so complicated!)

The post This Week in Photography: Spoiling for a Fight appeared first on A Photo Editor.