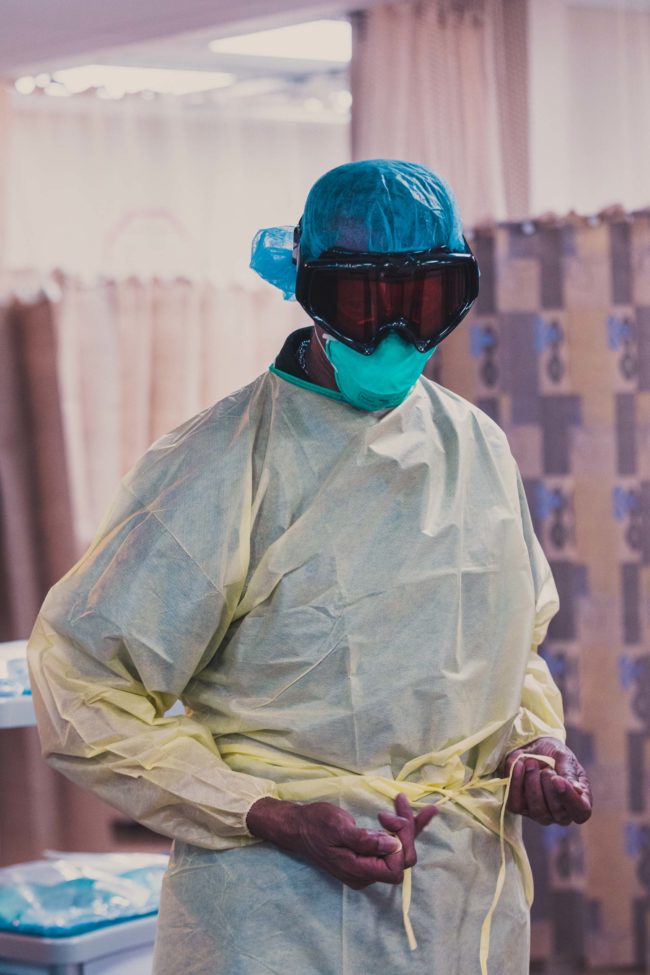 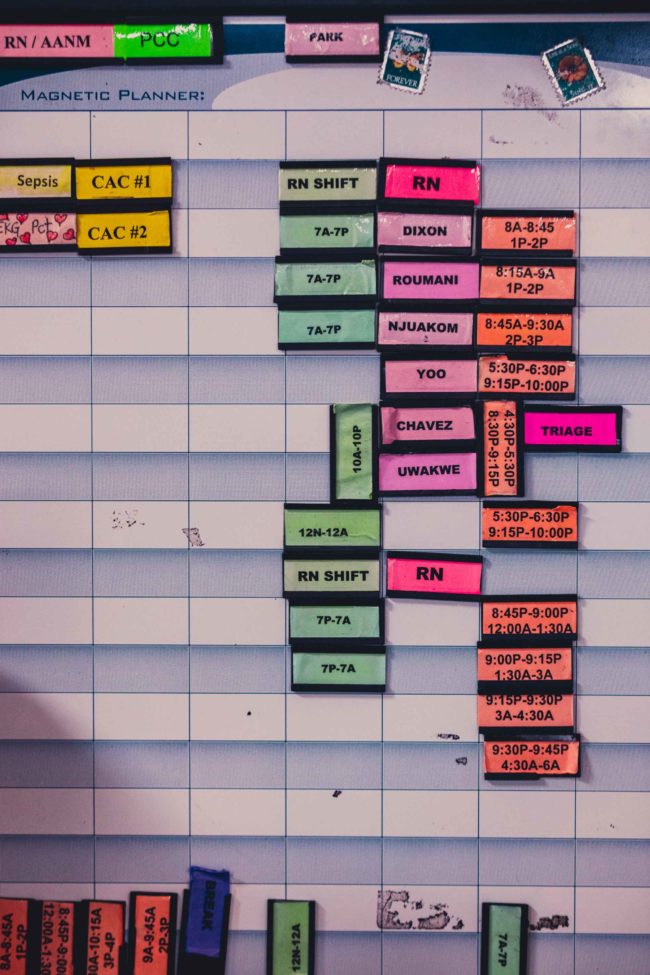 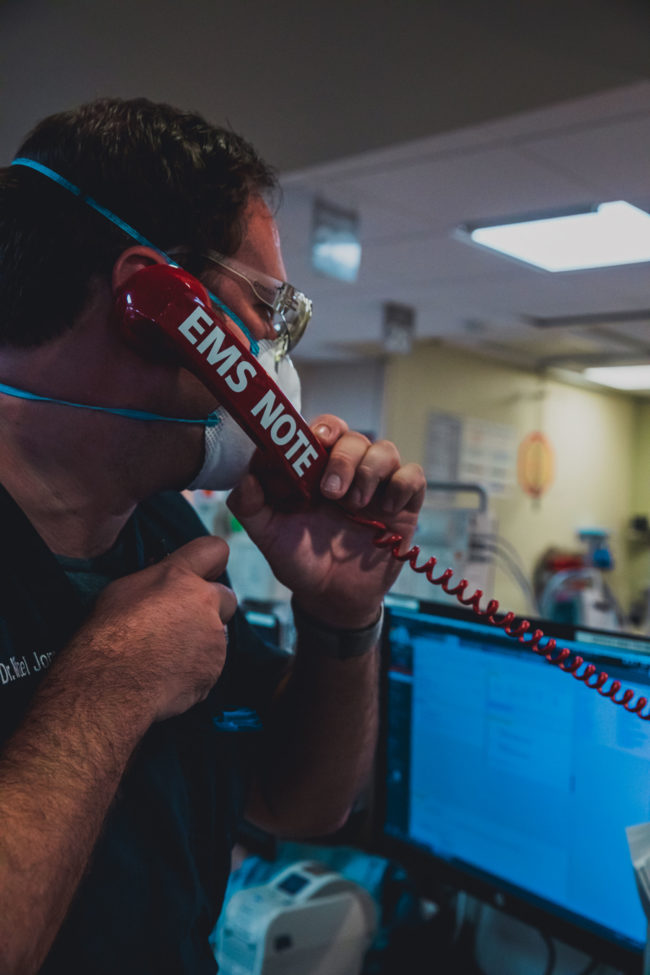 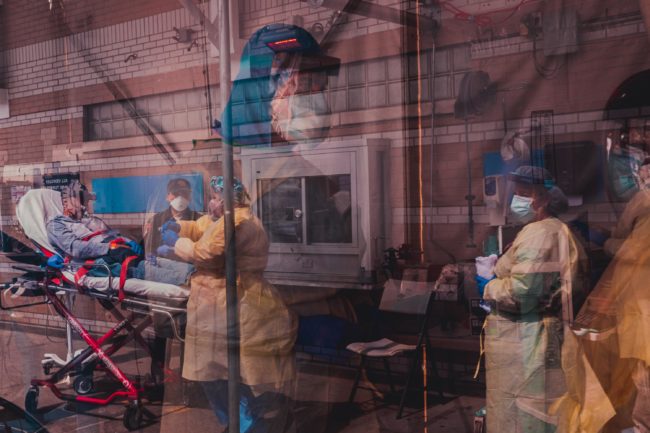 April 8. 2020 – Reflections of a patient looking into a tent receiving station set up for possible Covid-19 patients outside the emergency department at Jack D. Weiler Hospital in the Bronx, NY. When patients first arrive they check in at a window outside of the ER. (Photograph by Michael Kirby Smith for The New York Times) 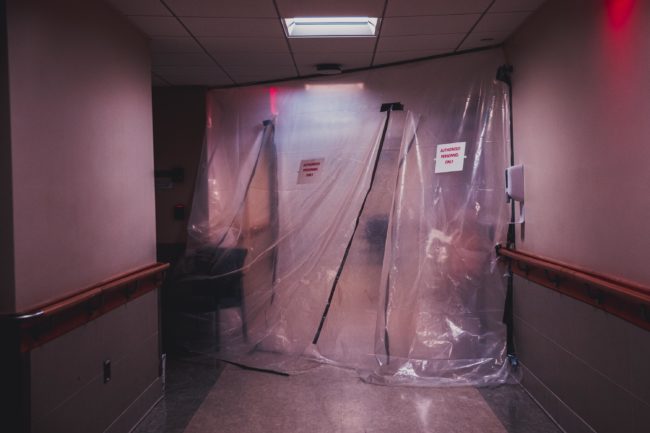 April 8. 2020 – Plastic barriers outside the emergency room at Jack D. Weiler Hospital in the Bronx, NY. (Photograph by Michael Kirby Smith for The New York Times) 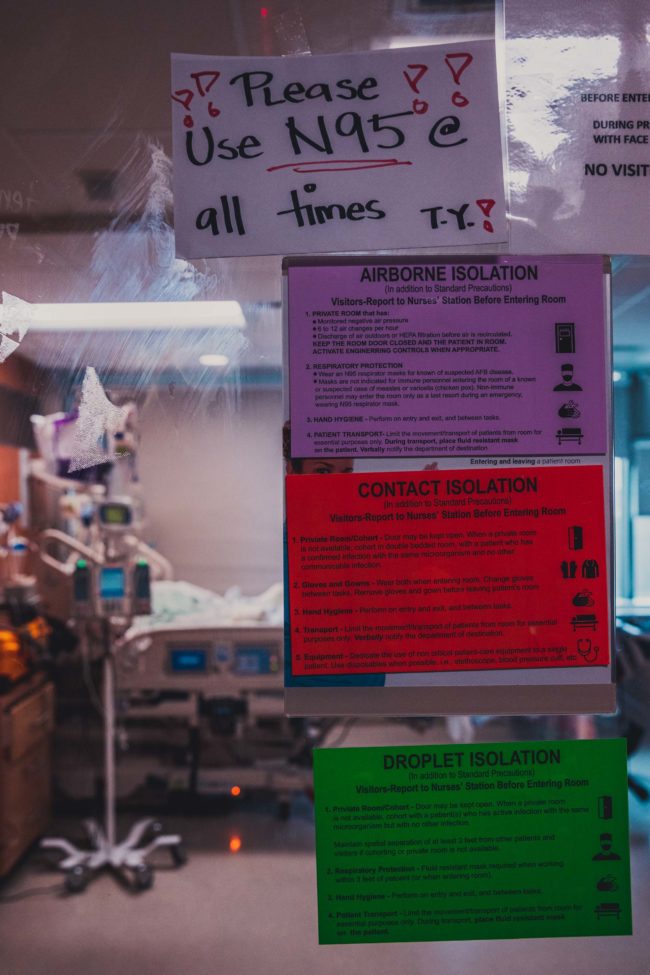 April 8. 2020 – A patient in the ICU at Jack D. Weiler Hospital in the Bronx, NY. (Photograph by Michael Kirby Smith for The New York Times) 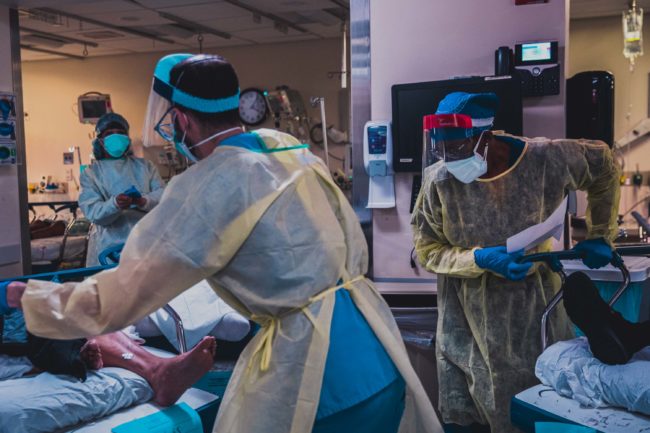 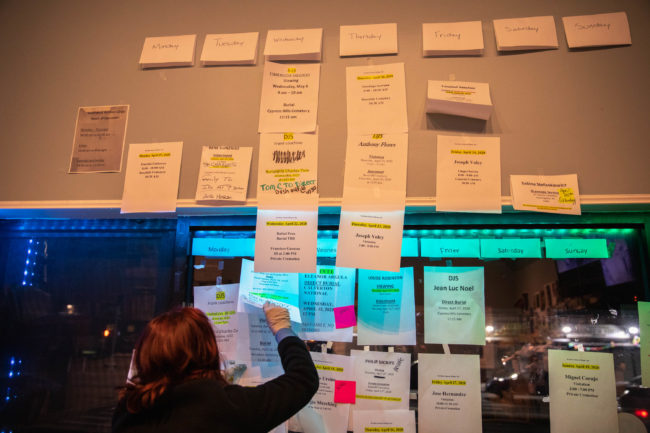 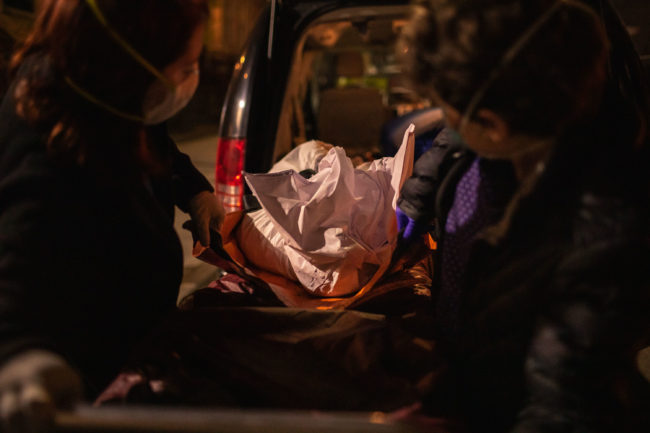 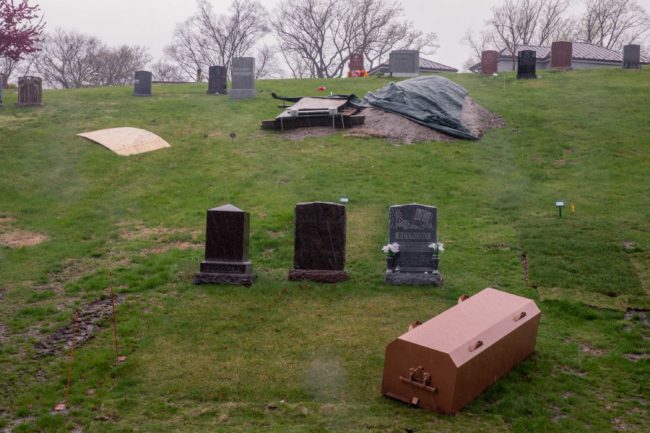 April 14, 2020 – The Woodlawn Cemetery and Conservancy in the Bronx, NY. (Photograph by Michael Kirby Smith for The New York Times)

Heidi: Photographically, how did this challenge you?
Michael: This assignment was challenging for a lot of reasons. At the point in which my colleague, Nicholas Kristof, and I were given access, the hospitals we visited in the Bronx had a vetting system in place to determine who would actually be admitted to the ER. This was due to the large number of people with Covid. The ERs were well beyond capacity, and the state of patients being treated was really severe. The hospitals were forced to improvise, creating additional space in the hospital for overflow. In addition to infrastructure issues, the staff was working well beyond normal shifts. There was a beautiful camaraderie in that, but it meant that the potential for an exposure mistake was increased. It was hectic and patients were in dire situations.

We didn’t have the ability to talk directly with our subjects and relied on following the medical staff as they worked. With strict HIPPA rules, if we didn’t have written consent we couldn’t photograph people. This is a huge challenge and something my colleagues and I have been discussing extensively. It’s important to show people what’s happening on the frontlines when a story of this scope is unfolding, and it’s really hard to do that and avoid photographing patients. When I’ve reported on large international stories there is not the same level of scrutiny and permissions required to work. This presents a huge problem for American journalists covering the crisis because we’re being forced to work on the periphery of the story. How do you make compelling, emotional work if you can’t photograph the human face?

Documenting social issues for Time Magazine and the New York Times is familiar territory. What made these three NYT Opinion pieces, “Heart Ache in the Hot Zone,  A Young Doctor, Fighting for His Life and A Young Doctor, Fighting for His Life different for you?
What made this particularly different was the lack of understanding of the pathogen. In the past, when covering diseases I’ve been able to research and talk to colleagues about safety protocols.  We still don’t understand this disease, and that presents a difficult challenge, particularly in risk assessment. It becomes very hard to trust your intuition, which we greatly rely on when we’re on the frontlines.  I’m pretty sure in time as we learn more I’ll recognize mistakes that were made in that early stage assessment process.

How many days were you in the Bronx documenting this piece?
We spent two full days working on this piece. We followed up later with another piece on one of the ER doctors, who almost died from Covid-19, about his personal experience.

Has your ability to create both motion and stills opened different opportunities for you?
I think my ability to work across different mediums, filmmaking and photography, is a benefit that has opened doors. When The New York Times reached out to me to work with Nicholas Kristof to cover the pandemic, there was concern about the number of people going into the ER with us. The diversity of skills, and the fact that I’ve had a long history with both the photography and video departments, was a consideration in thinking about the risk, and we were still maximizing assets we captured.

Does documenting history with moving pictures leave less room for manipulation and more room for veracity?
With both filmmaking and photography, you have the ability to manipulate because you’re holding the instrument of documentation. Sometimes I do feel like there is an added level of truth in filmmaking when you hear directly from subjects and help tell stories in their own words, but then again the purity and speed of taking a photograph and keeping a smaller footprint have a lot of viability.

The important part is knowing where you stand in terms of objectivity, and how your perspective and privilege influence it, and documenting history within the parameters you or the institution you’re working for set. Intention is something that evolves in the same way you do as a storyteller. Your abilities to bring scope and stylistic vision grow throughout your career

Describe the difficulties of working in your PPE? emotionally/creatively physically.
First, it’s really uncomfortable. You are wearing a lot of layers made with materials that don’t breath well, so it’s hot. There are a face mask, goggles, and a protective shield over your face alone, which trap heat and fog. This, of course, makes it hard to see which is our job as visual journalists. In addition, the PPE blocks you from being able to bring the camera directly to your eye, so a lot of times you are relying on your intimate knowledge of the camera and lensing if you have to shoot with limited vision.  You’re also just relying on a bag of techniques you’ve developed through experience when it comes to focusing, framing, etc.

One of the biggest challenges I didn’t expect was the difficulty of breathing in full PPE. I found it hard to rely on my breath as a tool of comfort. If I’m in a stressful shooting situation and find myself struggling, I’ll often pause, slow down, and take a deep breath. I wasn’t able to do this which was hard because there was a moment or two that it would have been really helpful.

We also didn’t have breaks for water or food because taking on and off the PPE was such a laborious process, and it wasn’t worth risking additional exposure.

What kind of impact has this historical project had on you, now that you’ve got some distance on it?
I’m proud of the project specifically because it had a large reach. A lot of people pay attention to Nicholas Kristof’s work, myself included, so I knew when my editors reached out that the project had a lot of scope in terms of reaching viewers. The editors were putting a lot of trust in me to deliver a film and photographs that meant something to me on a personal level.

The first piece of what is considered modern journalism was published in 1703 by Daniel Dafoe, (Great Storm of 1703 in Britain) 317 years later we have the same need for journalism, but why is this even more important now?
That’s a tough one to answer because journalism has alway served as a social service since it’s conception and we’ve always needed it. Journalism speaks truth to power and it is critical to humanity and civil society to keep those in power accountable for their actions. People’s lives are at stake.

One thing I can say about this moment in time that feels different is the state of journalism itself, which is under threat. The industry has drastically changed and there is a lot less of it being produced. This is a huge problem at a moment in history when we have an administration actively dismantling democratic institutions and pathologically spreading lies under the guise of journalism. Politics aside, this is fact.

Our role as documentarians is to capture and present the reality of what is happening in America and worldwide right now in this moment. It seems we’ve never been more divided as a country, and journalism is important to understand what is transpiring, to document both sides so we don’t allow biased systems to manipulate the American public. We should have no tolerance for people in power trying to write history with a false narrative. We should be beyond this as a society, but unfortunately we’re not. We’re documenting American cities burning while a pandemic devastates lives and huge parts of the American public won’taccept reality. It is a tragedy unfolding now.

Can you speak to your personal connection to journalism?
I think journalistically speaking I’m naturally drawn to what I consider important, historic stories. I believe in the social service aspect of good journalism, and I’m honoured and proud to contribute to institutions I believe in. Journalism is essential to the function of society and without it, there is no check on power. I originally got into photography as an art form, but my attraction to journalism was as a social service to better inform people and help us find similarities through human emotion and connection.