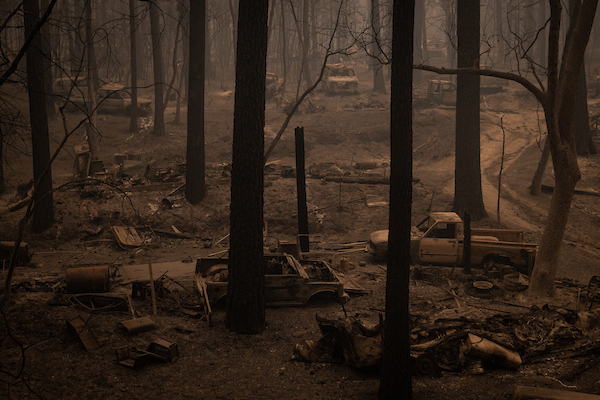 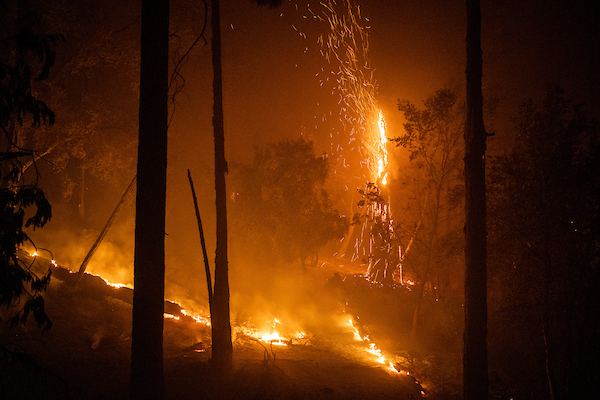 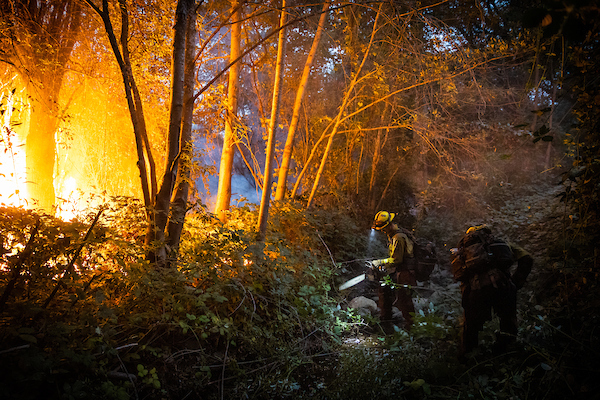 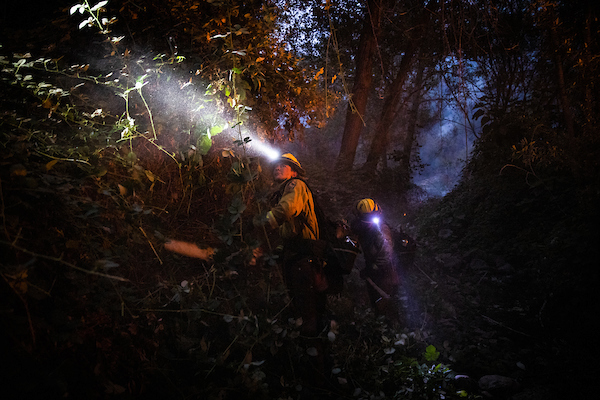 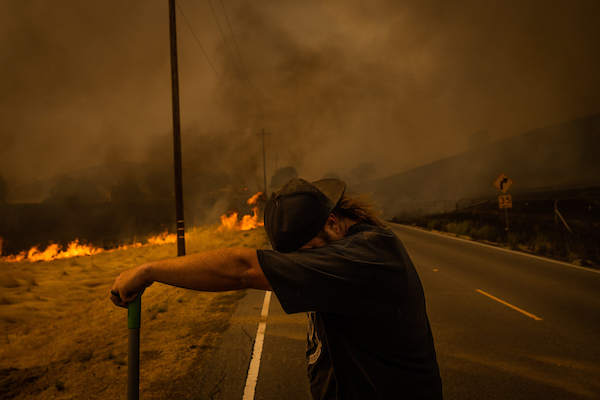 VACAVILLE, CALIFORNIA – AUGUST 19, 2020: Justin Haan wipes his face while putting out spot fires ahead of a wildfire to save his in laws home in Vacaville, California on August 19, 2020. The LNC Lightning Complex fire has burned over 32,000 acres. 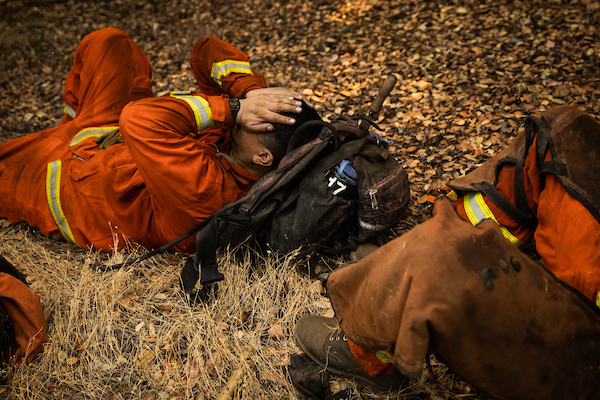 HEALDSBURG, CALIFORNIA – AUGUST 22, 2020: The Delta Conservation Crew, made up of inmate firefighters, takes a break from clearing a fire line on the Walbridge Fire, part of the LNU Lightning Complex, in Healdsburg, California on August 23, 2020. The LNU Lightning Complex fire has burned 341,243 acres and destroyed at least 560 structures. 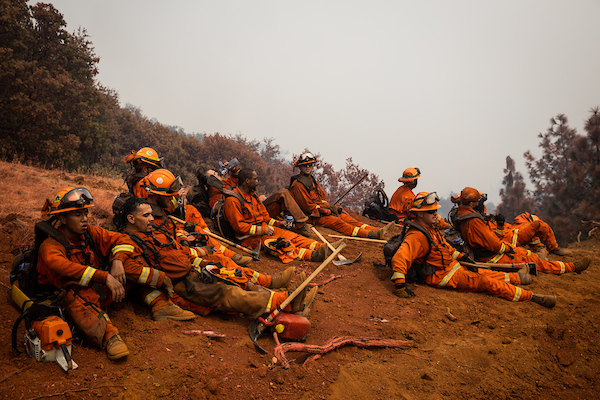 HEALDSBURG, CALIFORNIA – AUGUST 22, 2020: The Delta Conservation Crew, made up of inmate firefighters, takes a break while hiking out from clearing a fire line on the Walbridge Fire, part of the LNU Lightning Complex, in Healdsburg, California on August 23, 2020. The LNU Lightning Complex fire has burned 341,243 acres and destroyed at least 560 structures. 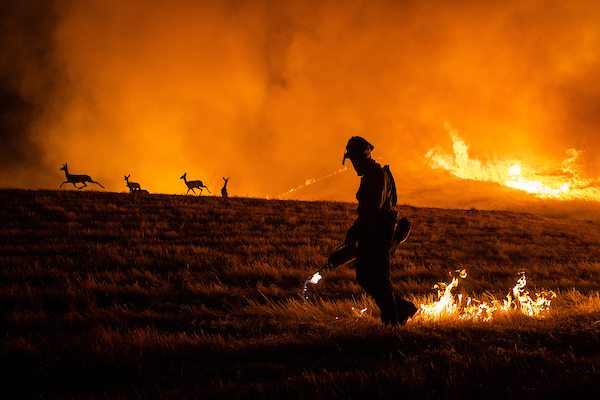 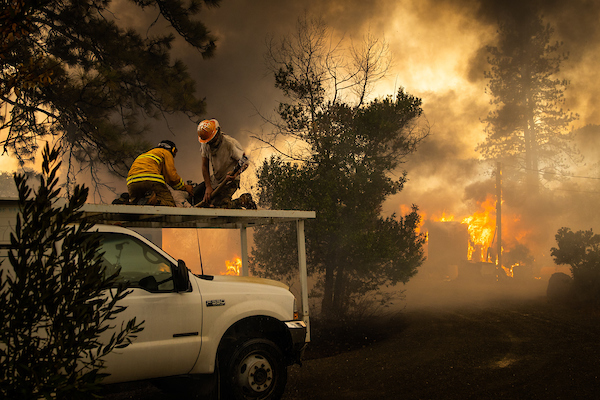 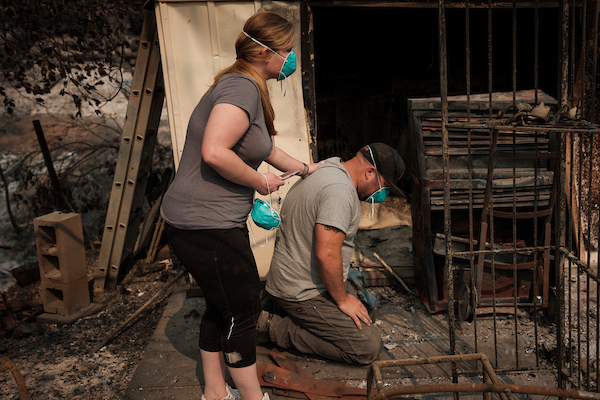 SPANISH FLAT, CALIFORNIA – AUGUST 25, 2020: Andrea Shumate comforts her husband, Josh Shumate, as he sifts through the remains of his grandmothers home at the Spanish Flat Mobile Villa, which was destroyed by the Hennessy Fire, part of the LNU Lightning Complex, in Spanish Flat, California on August 25, 2020. 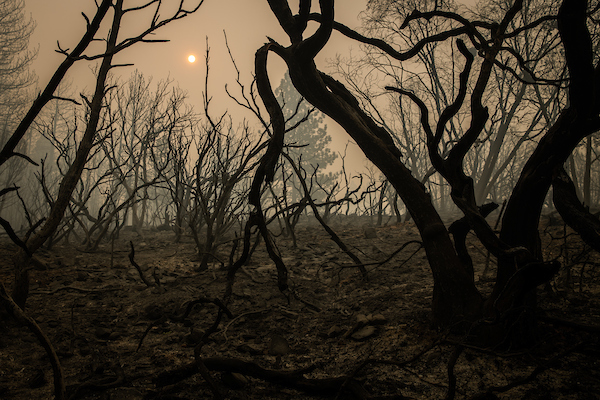 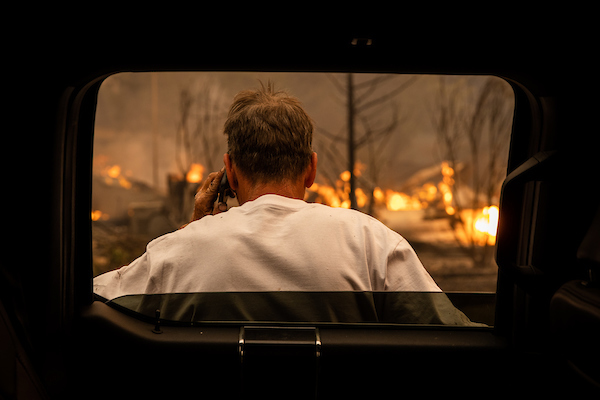 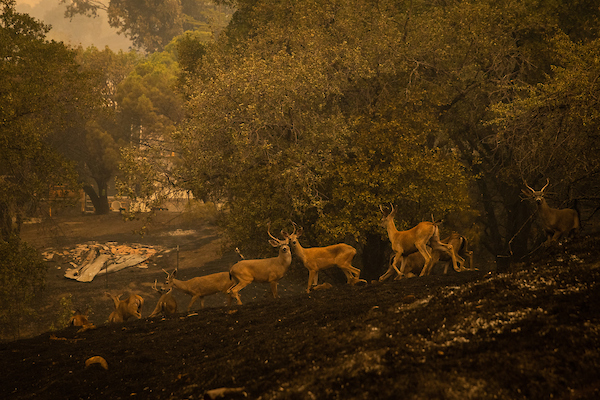 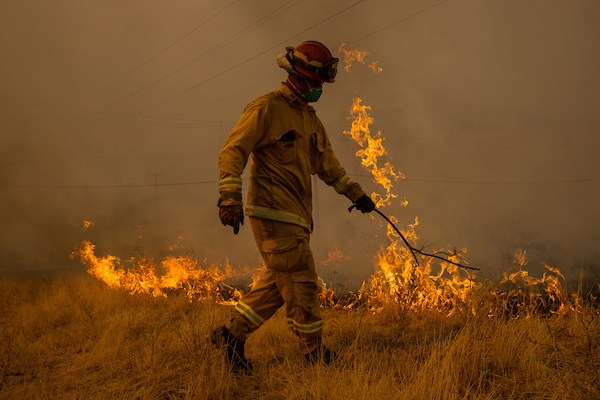 VACAVILLE, CALIFORNIA – AUGUST 19, 2020: A firefighter tries to burn out some weeds ahead of a wildfire in Vacaville, California on August 19, 2020. The LNC Lightning Complex fire has burned over 32,000 acres.

Heidi: You’ve been covering wildfires for the past 19 years, what made this season different?
Max: This season is different because we’ve had so many large, destructive fires so early in the season. We’re just entering the meat of the fire season, which typically only gets going in Southern California in the fall with the Santa Ana winds. California has already had more acres burn in 2020 than any other year, and the fire season isn’t close to being over.

Looking back over those years, what were some pitval moments?
However, I think it’s important to look back a bit further. When I first started covering wildfires in the early 2000s, they were primarily in forests, away from population centers. Isolated homes and small, rural communities would be threatened, but it was still primarily something that happened deep in the forest, typically on public land. Gradually, the fires began to move more quickly and explosively, driven by high winds, high temperatures and dry fuel, and threaten more and larger communities more frequently. The real eye-opener was the Tubbs Fire in 2017. Driven by high winds, the fire jumped six lanes of Highway 101 and burned the very suburban neighborhood of Coffey Park in Santa Rosa, destroying 2,900 homes. Since then, the Carr Fire in Redding and the Camp Fire in Paradise in 2018, continue this trend of wildfires increasingly burning into residential neighborhoods.

How did your love of National Parks influence your work?
I grew up camping, backpacking, climbing and skiing. I still remember the first time I saw the Tetons and later on the same trip, taking my first photo of a buffalo charging, blurred by my mom yanking me back into the car. Our family still spends two weeks every summer exploring National Parks and public lands. I think my love for wild places colors everything about my photography. It’s so inextricably part of me, that I’m not sure it can be separated from me and how I view the world. I feel most comfortable in wild places and more empathetic to those who live and work on the land. I hope that shows in my work.

What type of “training” do you do to stay ready in the off chance you’re out all night?
Honestly, I don’t think there’s much training that helps with sleep deprivation other than get a good night’s rest when you can. That said, I’ve gotten assignments on very short notice that involve a decent amount of physical fitness (in 2019 I climbed Aconcagua for an assignment with two weeks notice), so I do my best to stay in shape despite my ever-varying work schedule and life demands. I’m a firm believer that being in decent shape helps out in all kinds of ways – even if it is just a week or two of sitting in planes and cars, like many assignments.

What drove you to break the rule of staying close to your car for this assignment?
I left my car behind for the day I spent documenting the effects of the CZU Lightning Complex Fire on Big Basin Redwoods State Park mainly because the active fire had passed and the area was just smoldering. Since the area had already burned, it was in many ways safer than areas that hadn’t. Nothing is without risk, but this seemed like a reasonable risk to document the damage to the park and that was the only way to do it with the downed trees blocking the road. In hindsight, I’d underestimated the danger of falling limbs and trees. That’s something I’ll consider more carefully in similar situations in the future.

What type of respect for nature comes from doing this work?
With people there’s negotiation, with nature it’s more observation and keen awareness of the moment, situational awareness….

Fire is natural. It’s a natural part of our ecosystem that’s gone haywire from man’s effect on the landscape and climate. To see fire eat and charge its way through brush, trees and homes is to engender massive respect for the power of nature. You need to be always watching, looking behind you and making sure your escape path is still clear and your vehicle isn’t endangered. But over the years it’s gradually had another effect on me: to view forests as ever-changing organisms, not as a museum exhibit frozen in place for our viewing pleasure. Typically, as humans we can only see a forest or landscape change over a lifetime of observation, a wildfire changes things in minutes or hours. It’s always cool to go back to a burned area the next spring, and see just a few months later how much green growth there is after the winter rains.

I’m no firefighter or scientist, but I have learned to distinguish between the creeping fire that burns brush, deadfall and the understory; and the cataclysmic infernos we’ve seen more of recently, that completely nuke the landscape and leave nothing alive.

How much do you interact with the firefighters and what kind of earned trust is developed?
It’s rare for me to spend more than a few hours with a firefighting crew. I always show respect by asking permission to photograph them, and they’re almost always friendly and very accomodating. If it’s slow, they’re often hungry to chat with someone outside of their crew as they’re often out for weeks at a time, going from one fire to the next. I’m wearing the same PPE they are, do my best to stay out of their way and not become a liability. I think they appreciate that.

Above all, I’ve gained massive respect for firefighters. Being a wildland firefighter is incredibly demanding, physical work. Hand crews hike miles through rugged terrain during the hottest months, lugging hand tools, chainsaws and fuel, all while wearing thick, fireproof nomex clothing. Then they carve a fire line through impenetrable brush and trees, officially working 24 hours straight, but often much longer. They’ll often do this for months at a time, away from their families, who are often living in the very wildland urban interface they’re working to protect.

Do you show your daughter your images?
My eight-year-old daughter has seen my wildfire images in passing. I don’t make a big deal about them and she rarely asks about them. She’s usually just excited I’m home and wants me to play dolls or Legos with her. But my experiences do lead to a more informed discussion when we do come across a burn scar while out hiking.

What are the lessons that these fires teach you, or what is it a reminder of?
I’ve learned lots during my years covering wildfires, but most importantly, I’ve learned how much of an effect man is having on our environment. Although well-intentioned, our decades of fire suppression has only increased the number of catastrophic fires. With one record-breaking fire season after another, the effects of climate change transcends statistics and is plainly evident in the ashes of our forests and communities.

The post The Daily Edit – Max Whittaker appeared first on A Photo Editor.