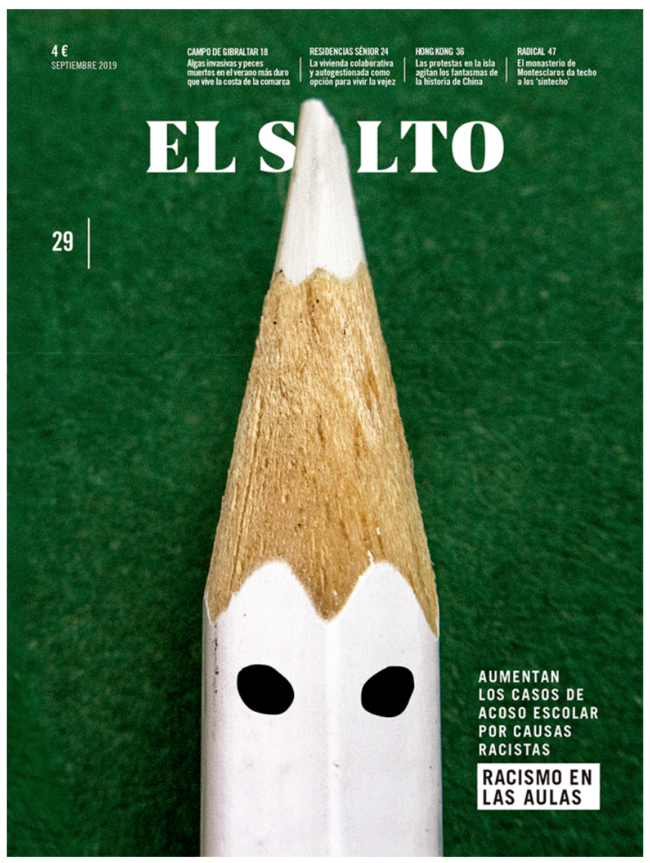 Heidi: How did this idea come about?
Byron: This idea came about to illustrate an article about racist bullying in schools in Spain. This is a delicate yet invisible topic and is not given enough importance by teachers nor senior leadership in schools. Because of this, we had to look for an image that expressed the true severity and consequences of racism going unchecked. Straight away we thought of the white pencil as a representation of the KKK but we did not know how to execute it. Then we remembered one of the posters of the movie Blackkklansman by Spike Lee. The idea of presenting a close-up of a pencil fit perfectly. In fact, I copied the hollow of the eyes in the exact same way as the Blackkklansman poster. I usually get a lot of inspiration from films.

How many issues have you designed? Is this job your act of resistance?
The newspaper I work for has already published 48 issues. I have put love into designing each and every one of them. One of my tasks (among other not so fun things) is to create designs and illustrations around social or political issues. This is my job. However, to work for a newspaper like El Salto, without bosses, self-managed and free from advertising revenues from dodgy companies, makes every day an act of resistance in a capitalist system.

When did you know art and social justice was your calling? What was some of your early work like?
At first, design was a way of making a living and I did advertising work for small companies and design studios from the age of twenty. I started to use design for social issues during the 15M indignados movement. There I saw a clearer objective for my designs and I began to make posters for protests against the government and visuals for self-managed film festivals. During these years, I also began artistic projects with other artists and activist groups.

You take images and also draw, does one inform the other?
Yes, without a doubt, although I am clear about the differences, I think that working with different disciplines enriches the projects and gives you more freedom when thinking and carrying out different concepts.

What role does art have in the world today, in your mind?
It is necessary to clearly differentiate between the art circuit/market and artistic processes that happen outside of the mainstream. In the art circuit, art plays a deactivating role and ends up serving as another spokesperson for reproducing discourses that perpetuate oppressive systems, even if they seek otherwise. The space and the environment ends up deactivating any act of dissent, turning it into a product. Fringe art is a wonderful field to explore and many projects and artists have been hitting hard.

What would you tell your younger self?
Everything will be turn out ok.

What are you working on now?
These days I am working on designing anti-fascist posters. The extreme right in Spain has carries a lot of support in the news media and there they are given a voice. We must prevent fascism re-entering Madrid via these extreme right parties in the next local elections.