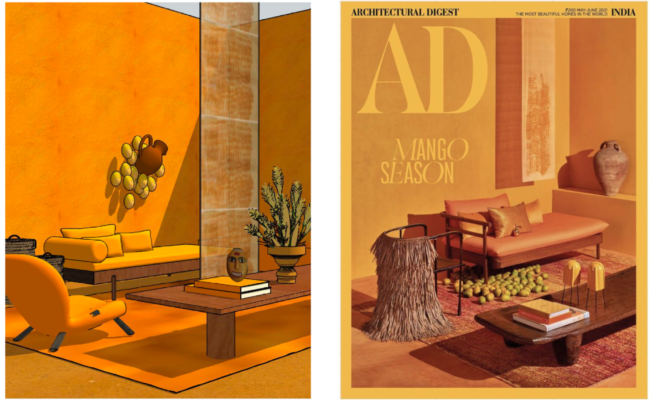 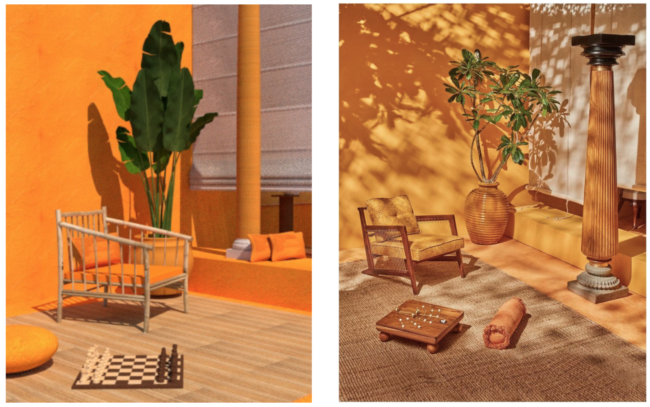 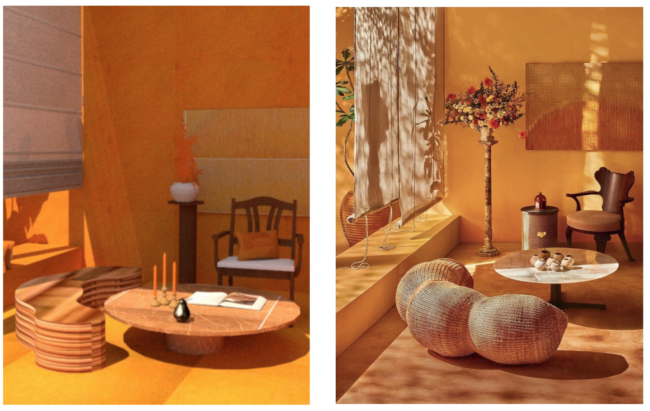 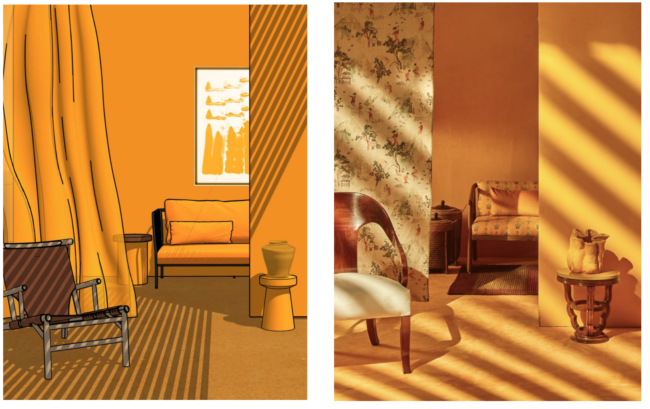 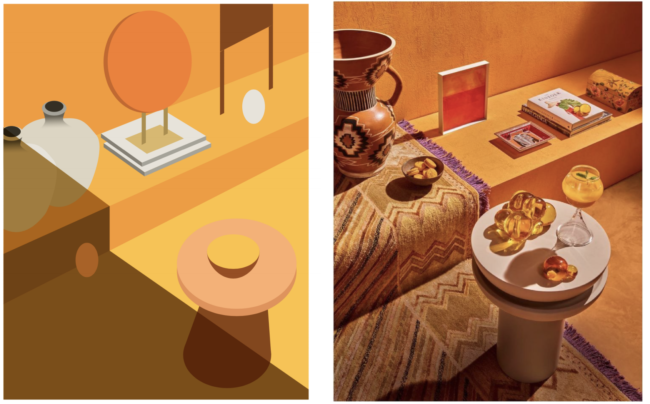 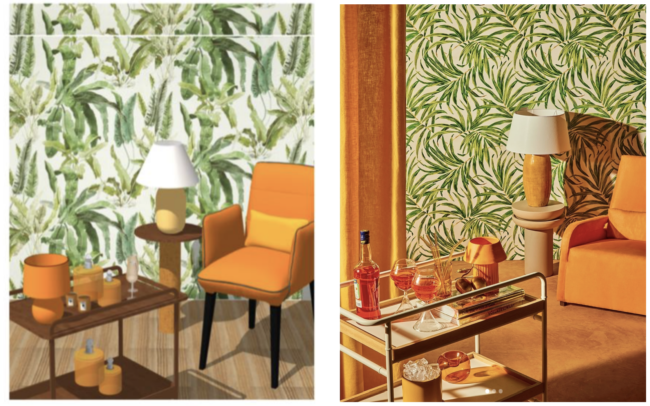 Heidi: What does mango season represent to you?
Pankaj: The mango season represents a lot of childhood memories for me as we had summer vacations from school in the season and would absolutely devour anything with mangos. Climbing trees to pluck the ripe mangos, hogging on a mango only meal etc.

It’s been a difficult year for India, was this a moment to find joy and celebration in color and creativity?
Indeed it was. Not just for me, the entire team. Everyone from Greg Foster the editor in chief of AD who remotely monitored everything,  the lighting crew, production helpers in the studio were thrilled to see the outcome on screen during the shoot. The 2 days of the shoot made us forget the challenges outside the studio for the duration. To be honest it hasn’t been easy to conduct shoots as often as before for obvious reasons and the mango shoot really filled in the vacuum for doing something satisfying creatively after a long gap.

What has this past year taught you as a creative?
The past year has definitely taught me to be more patient and flexible for approaching any kind of project. More importantly it made me realize that over a period of time only good work can sustain. The surge in the online consumption of creativity has given us more than enough options to find inspirations. So only something remarkable can be remembered.

How did this idea come about for AD, and what are the dates of mango season?
Priyanka Shah the art director and stylist of the shoot came up with this idea of romanticising the love for Mangos in the way that she knows best. She came up with some sketches and got us all hooked on the idea. From early March to late June is the approximate season for Mangos. There’s usually a bling of yellow every shopping place you go to thanks to mango-mania that is basically unanimous all over India.

How much time elapsed between the sketches and the sets?
It took a little over 2 weeks after the sketches were finalised to bring everything to life. From finalizing numerous products to organising a large enough studio space for the sets to accommodating the extensive inventory. The actual set making was about 3 days as the flooring and the walls had to be constructed and finished with a special texture and tone to give a sliced mango effect. The final touches happened right until we got our first test shot since the details needed a final approval from the camera view finder and lighting set up.

Did you have natural light in the spaces, or was that lit?
This was an artificially lit set to achieve the right amount of the shadow play and to light up the areas and products in the shot properly.
An elaborate plan for lighting was discussed as the space we shot in was not a conventional studio, it was an experience center area which we were generously allowed to completely transform for the shoot by Ishan Thacker of MAY Projects India.

What type of mood were you going for with the light and images?
The mood of the images was to bring the feel of open courtyards of traditional India homes that enjoy well lit spaces in the house throughout the day. The lighting was to bring in a sense of a summer afternoon and early evening. The attempt was to keep the look and feel realistic and natural, and to bring out the feel of mango in the photos.

Conde Nast International has gone through global change, how has that affected your work, if at all?
Indeed it is a big change and I think it will affect my work. Hopefully in a good way. I have been contributing to all four Condé Nast India titles (and international as well) for over a decade now. It took me a long time to find a sync with the various teams and deliver consistently. A lot of times I was entrusted with a shoot not just because of my talent but my temperment with the team and understanding of the particular editorial imagery. With an increasing trend of remote operations and teams merging nationally and internationally it will be a new ball game to find a sync with editors and creative directors from afar that you have never met before. Besides that, it’s a good time to explore the horizons of meeting creatives from everywhere.

What are you looking forward to this year in publishing?
Of whatever is left in the year and next I am looking forward to see how the print editions will perform. Theres has been big shift in the content creation already I feel. Lots of online creators have taken over and it will be interesting to see the contrast between quality and quantity. 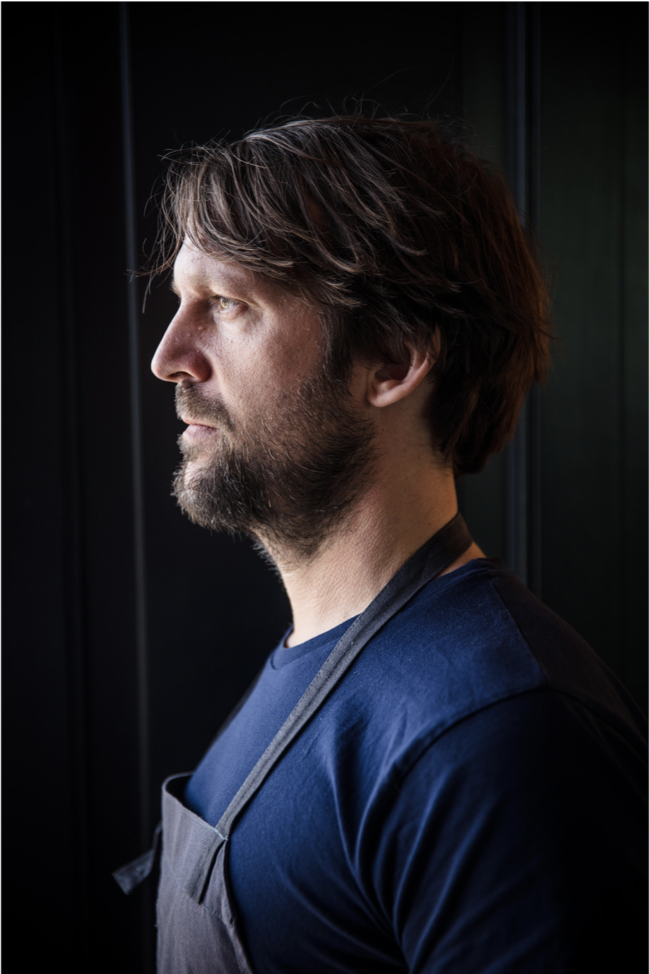 When I was the Creative Director at Vogue India, we worked together photographing Chef Rene of Noma for a story by food editor Sonal Ved, tell us about this portrait.
It was win-win opportunity for me. To do a portrait of someone like Chef Rene, see the inside of a world class restaurant like Noma and to work with you. When Sonal Ved first asked me for the shoot it was an instant Yes. I firmly believe in the thought that, just like an athlete is as good as his/her coach, a photographer is also good as his/her creative director. To prepare better for the shoot apart from my home work of research about Rene I spent considerable amount of time in the restaurant a day before to familiarise with space and figure out different options for the next day. Rene is a busy chef, so to make the most of his limited time the test shots from the previous day were very helpful. Link to the story is here