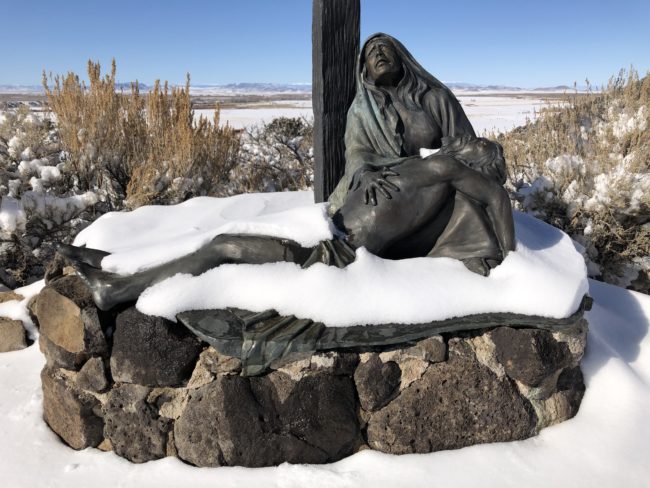 Buckle up.
We’re going for a wild ride today.

(But at my wife’s request, I’m going to keep it moving.)

She liked that last week’s column was info-dense, but also clocked in at 1200 words, rather than the 2500 I was dropping with regularity in #2019.

After all the time I spent hoping that 2020 would finally come, it’s hard to believe the year is already 1/12 done.

Obviously, I know that years are sequential, but who decided to start at 0?

We’re now exactly, or approximately 2020 years after Jesus, a Jewish guy in the Holy Land, was born?

Jesus, a young Jewish preacher, a rebel and an upstart, challenging the status quo in Israel, which was then a vassal of the Roman Empire.

He kicked up shit for the Jews the Romans put in charge, and also for the Romans themselves, and was killed for it in an awful way.

I did a bunch of reading on the subject this morning, readying for the piece, and was not surprised to learn the sad ending of the story, (for the man Jesus, anyway,) was all about money and power.

The Rabbis were charging people to get “clean” enough to pray, making bank, and Jesus called them out for it. (All this I learned from an archived BBC website.)

Later, a massive religion grew up in his name, with billions of people believing he rose from the dead, after being crucified to death, and that he was actually a combination of man, God, and the Son of God.

Judaism, the religion Jesus was born, lived and died believing, claims that no Messiah, no divine being, has yet come back to Earth, but billions of Christians disagree.

Honestly, as Jews, we must see some missed opportunities, with Islam and Christianity sprouting from our religion, becoming the two biggest faith systems on Earth, while we’re a few measly million people in this world.

Why am I on about this today?

Where can this possibly be going?

I know you must be asking yourself that.

Come on.
Admit it.

The truth is that 2020 has felt different than #2019, and I’m shaking things up accordingly. (For example, no early-morning email check, to keep the cortisol down for a few hours.)

So last Friday, my wife and I decided to do something we never, ever do.

On Friday late-afternoon, after our son has his Hebrew practice, the four of us piled into the car to leave Taos, driving the hour and forty-five minutes to Santa Fe, just beating the dark, so we could attend a public opening at the New Mexico Museum of Art.

I’d been overdue to see an exhibit there, curated by Christian Waguespack, which focuses on the Penitente culture in Northern New Mexico.

It was a 17th through 20th Century local, Spanish Colonial Catholic tradition in which men would pray together, whipping and flagellating themselves, in a small building in each community called a Morada.

By the time we rolled into Santa Fe, the sky was rapidly blackening, and our collective hunger was rising.

The parent in me thought: we’ve got to avoid a collective food crash.

The art critic in me thought, let’s get to the museum first, since it’s on the way, and we’ll get more time there.

(Quick snack at Trader Joe’s it was.)

We arrived at the New Mexico Museum of Art shortly thereafter, after a short walk across the plaza, which featured large trees extravagantly lit in non-harmonious colors.

There were nice snacks in the lobby, and free admission, so my kids each ate a cheese chunk or two, though I was waiting for good restaurant food.

(The Santa Fe food scene is much better than ours in Taos, IMO.)

We headed through a lovely tent, covering the open courtyard of the early 20th Century building, and then into the special exhibition section in the Museum.

Only then did I learn the exhibition, “The Birth, Death and Resurrection of Christ: from Michelangelo to Tiepolo” was all about Jesus, his life, crucifixion, lamentation, and resurrection.

(I’d decided to come trusting it would be cool, not bothering to learn the details ahead of time, if I’m being honest.)

And there were indeed masterpieces on the walls, some of which were drawn, others a wash in a light ochre.

Michelangelo, stood out, as did Filippo Lippi. 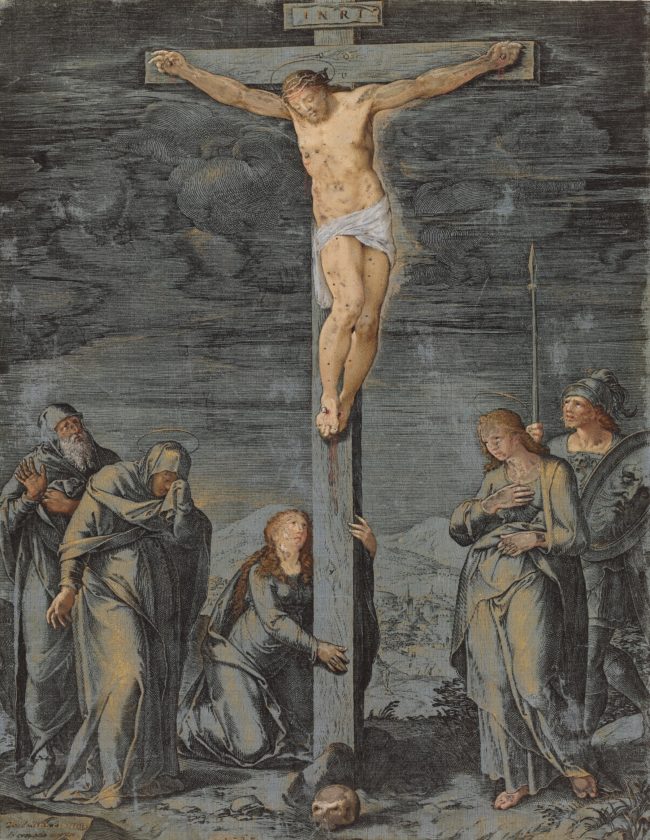 Cornelis Cort, The Crucifixion, after Giulio Clovio, 1568, Hand-colored engraving with bodycolor, heightened with gold and white, printed on blue-gray silk.
Credit: The Trustees of the British Museum 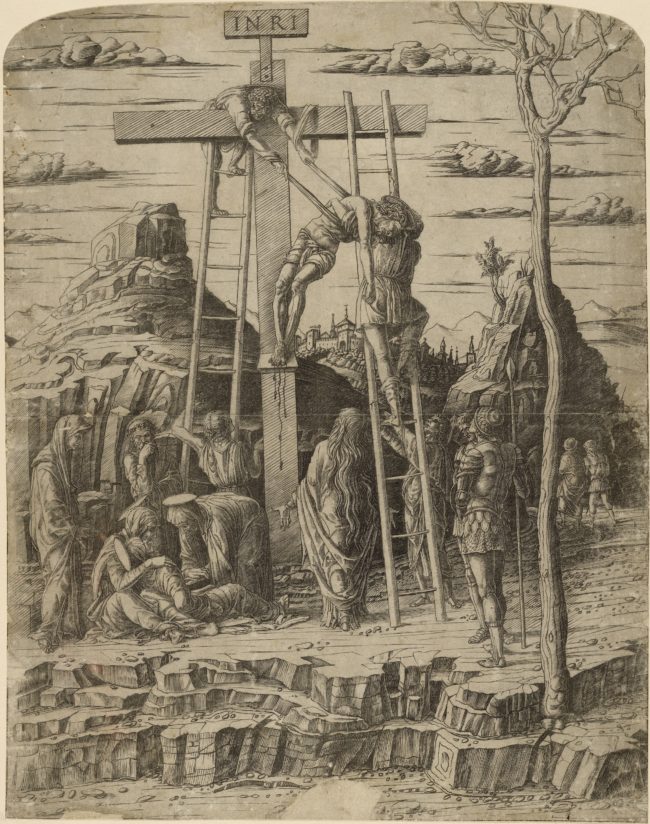 School of Andrea Mantegna, The Descent from the Cross, 1470–1500, engraving.
Credit: The Trustees of the British Museum 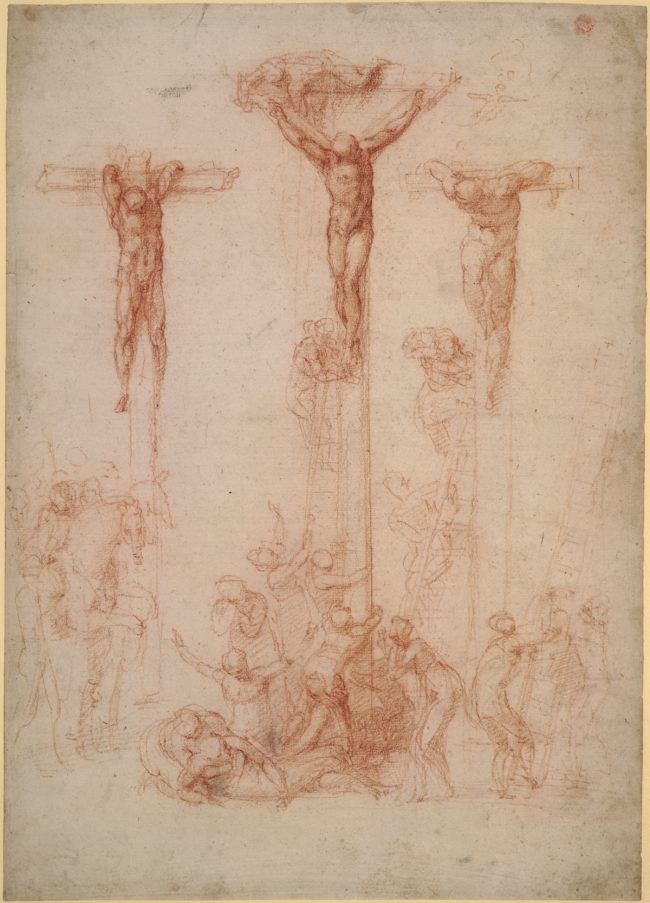 Michelangelo, The Three Crosses, 1521-1524, red chalk.
Credit: The Trustees of the British Museum

My daughter fled quickly, with my wife in tow, and I only briefly heard, “she wants to draw at the kid’s station out there.” (I later learned the pictures freaked her out.)

My son and I flitted about, getting hungrier by the moment, with many of the pictures being properly ogled by the a nice-sized crowd.

All the masterpieces were on loan from the British Museum, so it was an opportunity for New Mexicans to see old-school, proper European art, without having to leave the continent.

Frankly, I felt like the smart move would be to come back, without the crowds, to sink into the details of admiring a 500 year old drawing, without someone waiting their turn.

But you can certainly see how Jesus imprinted on my mind rather fiercely, and off we went to the Penitente show, “Picturing Passion: Artists Interpret the Penitente Brotherhood.”

Here’s where I tell the truth, because the same curator was responsible for both exhibitions.

The paintings, drawings and photos in the smaller Penitente show, while local and younger, had a creepy, scary, powerful, religious juju that blew me away. 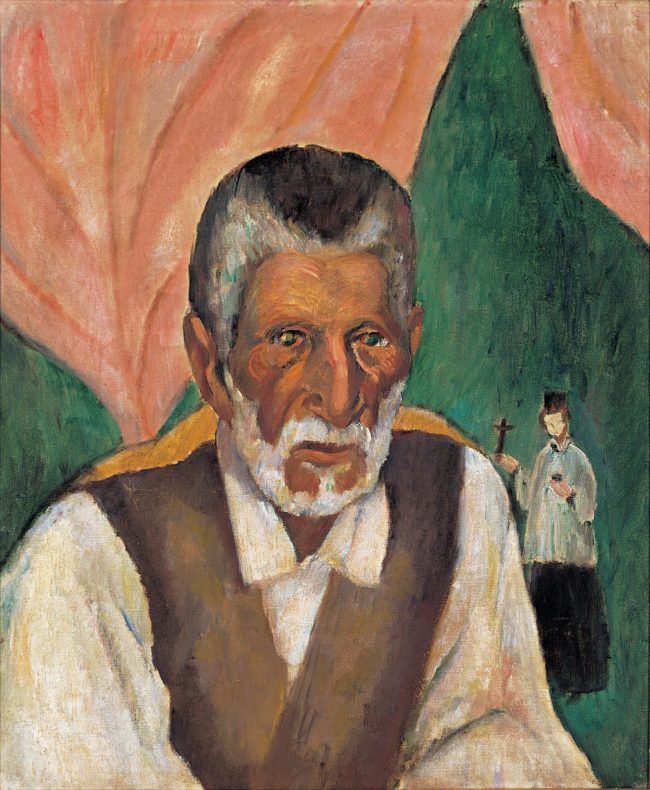 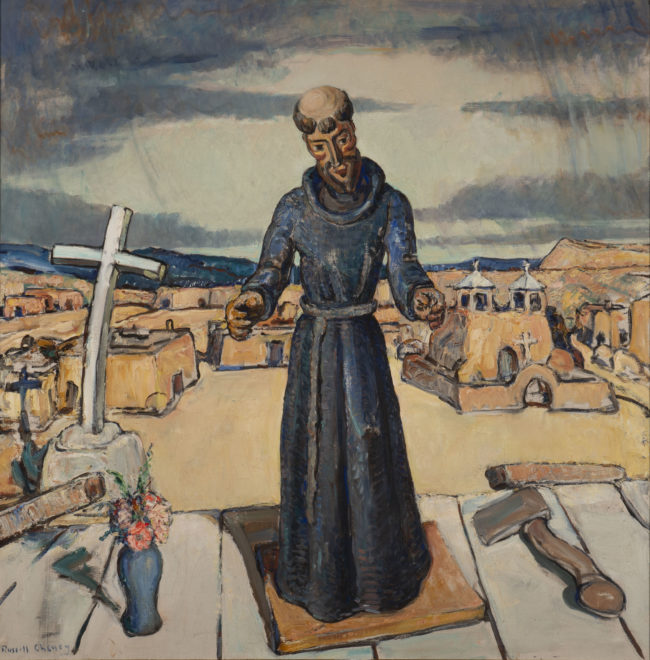 Because each object was so tight, and in the smaller rooms, with the lower ceilings, in which the Northern New Mexican architecture so clearly matched the subject matter in the work, everything felt just perfect. 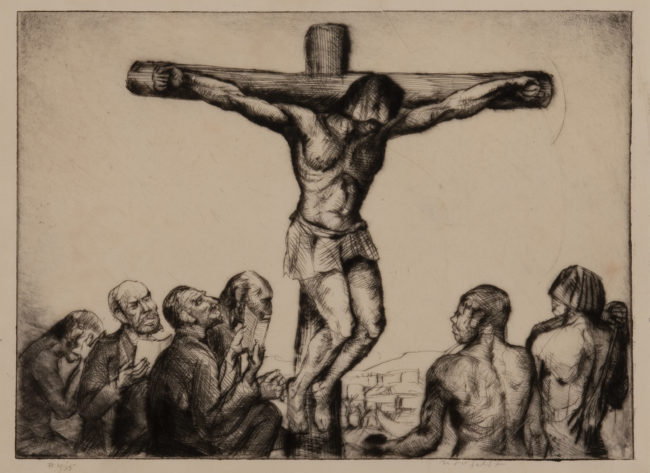 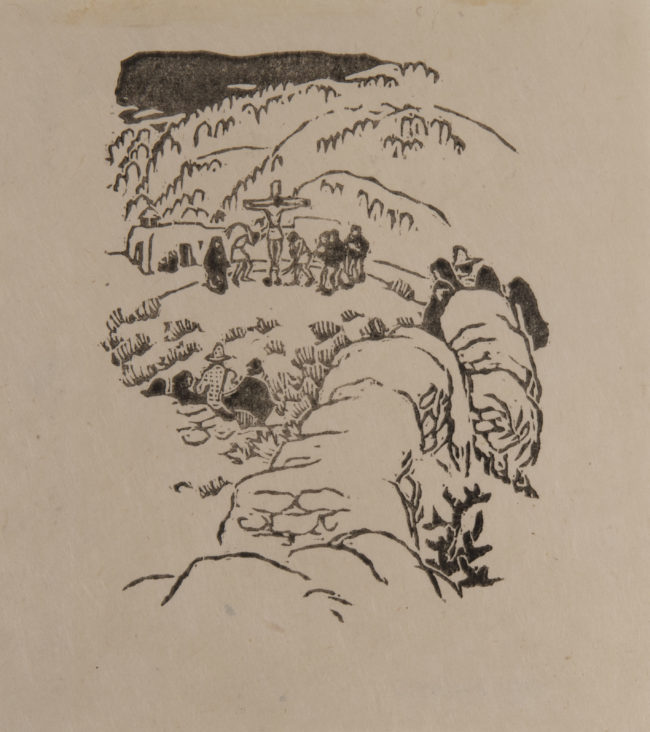 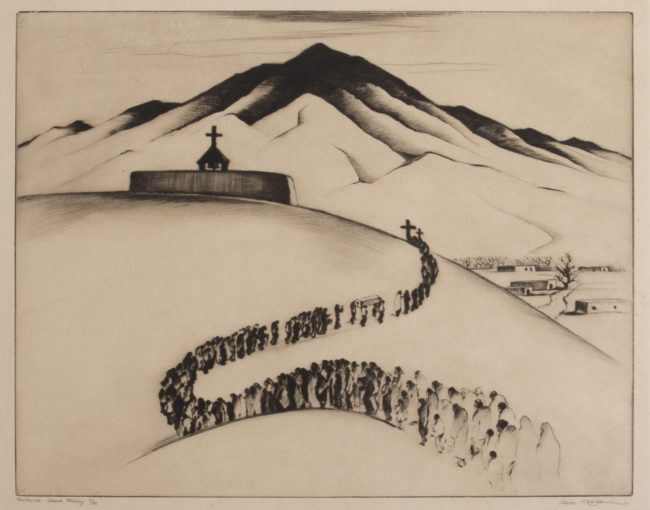 For all the talk of Meow Wolf, (which in fairness I have yet to visit,) and the Instagramification of the world, with backdrops mattering more than reality, I thought this show was a breath of fresh air.

I didn’t have enough time to process each piece, with my stomach rumbling, but the self-flagellations were there and the crucifixes. 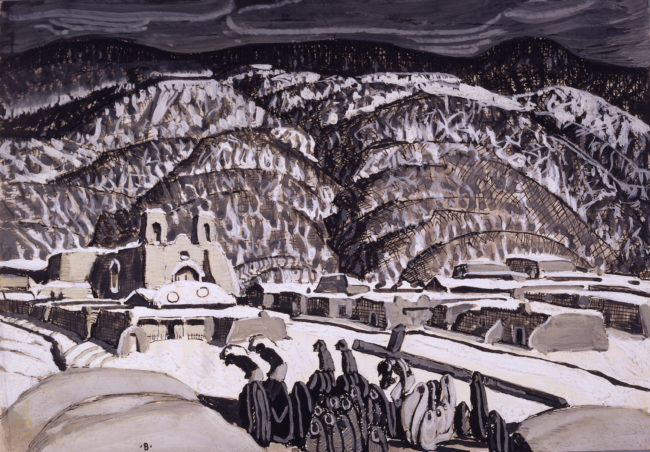 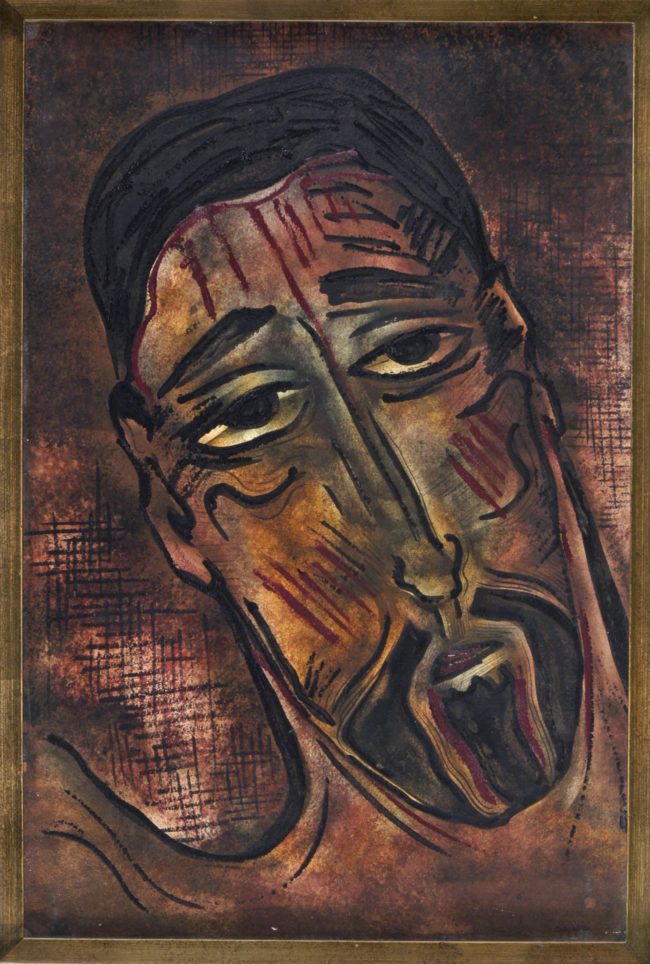 There was one standout, black and white documentary photo by Miguel Gandert, of some 20th Century Northern New Mexican Penitentes, in street clothes, outside the Morada. 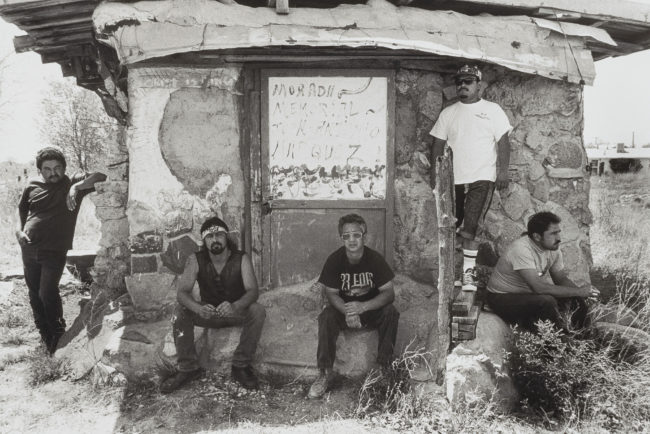 You know, week ago, I hadn’t given Jesus much thought.

(Though with American politicians like Mike Pompeo actively awaiting the Rapture, maybe we should all think about Jesus more often?)

But then I saw those two art shows, and the imagery bore down into my consciousness like a dental drill.

After a weekend spent moving washing machines, learning stick fighting, and hanging pictures, we kicked it up a notch on Tuesday, when my wife had the day off from work.

She suggested we cross the border to San Luis, Colorado to visit the Stations of the Cross Shrine that looms above town. (Among other reasons.)

Jessie had always wanted to do it, and again, in 2020 we’re gunning for new things, so I said yes.

I swear, I made no connection to the intense, Catholic work I saw in Santa Fe, nor did I plan to write this column.

We parked the car next to the humble town hall, and were instantly met by a huge old dog, who leaned into me for pets.

He was sweet, and a chunky collar said his name was Bam Bam, the Mayor.

It had snowed the night before, and Bam Bam accompanied us across the street, and a little foot-bridge, where we soon blazed our own trail in the 5 inch snow, as no one had yet gone all the way up the hill.

Bam Bam seemed an apparition, or a spirit guide, there was no way around it, and when he chose to turn back, we waved, and kept on alone.

We broke trail in fresh snow against a perfectly blue sky.

There were no people around.

It was all ours.

Up we went, stopping occasionally to check out the sculptures honoring Jesus’ last ascent, with his cross, to be crucified.

I believe there were 14 bronze sculptures in all, by local artist Huberto Maestas.

(You knew I’d come back around to it, right?)

Jessie and I remembered the Carmel Mission, and how it was similar in its intense combination of beauty and spirituality.

But the setting here, on a mesa-top called the Hill of Piety and Mercy, surrounded by snow-covered, jagged Rocky Mountain peaks in the Wild West, was unlike anything I’ve experienced before. 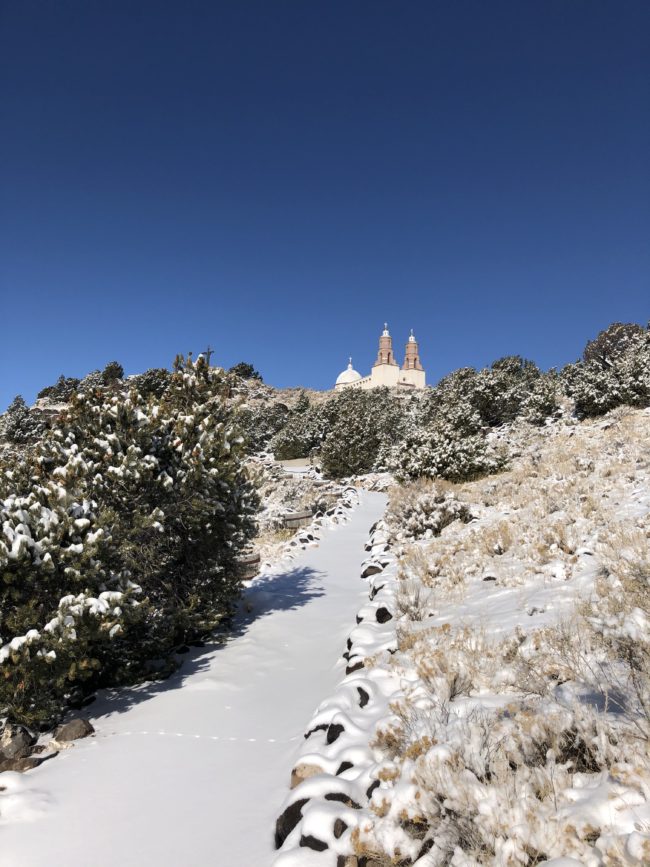 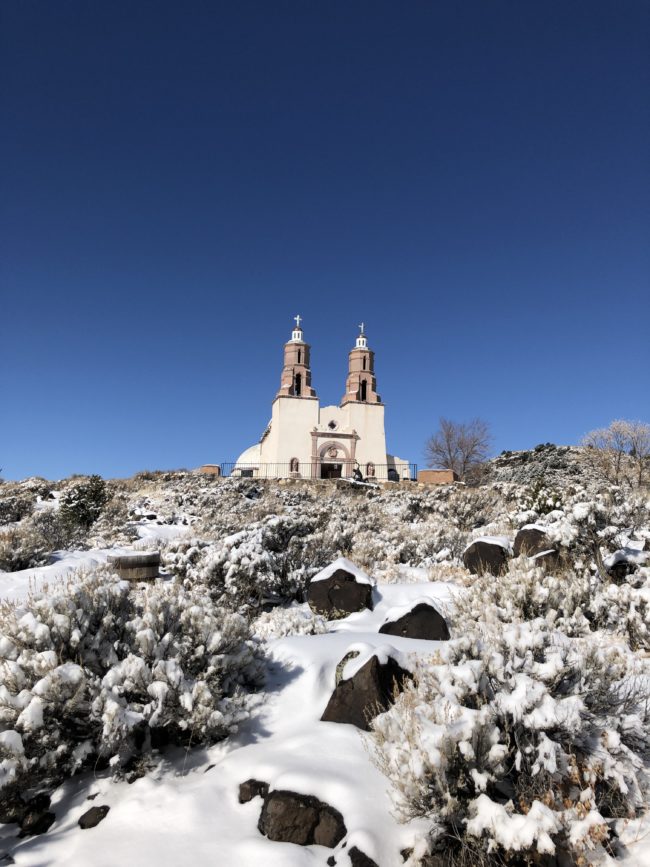 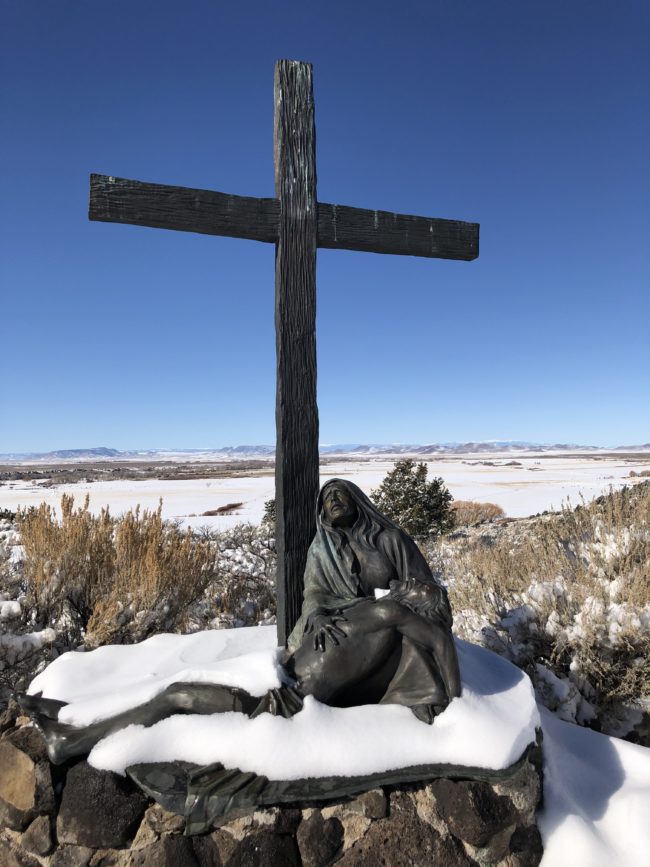 I stopped at the Pieta sculpture, Jesus draped across Mary’s lap, (which I now know is a subset of the Lamentations, thanks to the excellent NM Museum of Art Gallery Guide,) and made this video for you.

I’m not sure I’ve ever been to a more stunning location for a piece of art, nor at a more perfect moment to view it.

I’ve seen better art, in more famous places, but nothing more perfect than this spot. 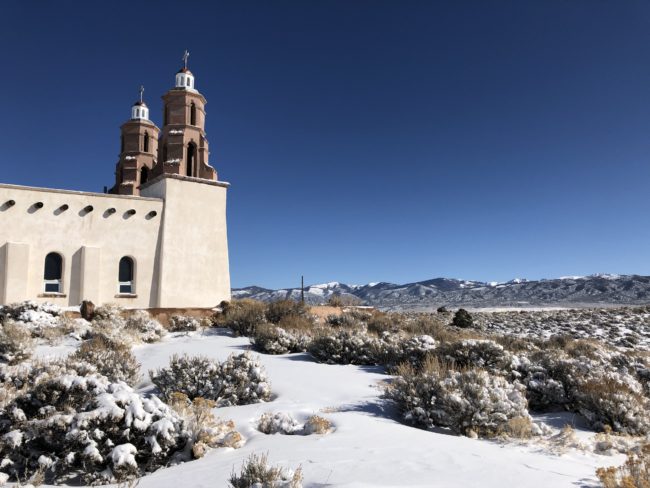 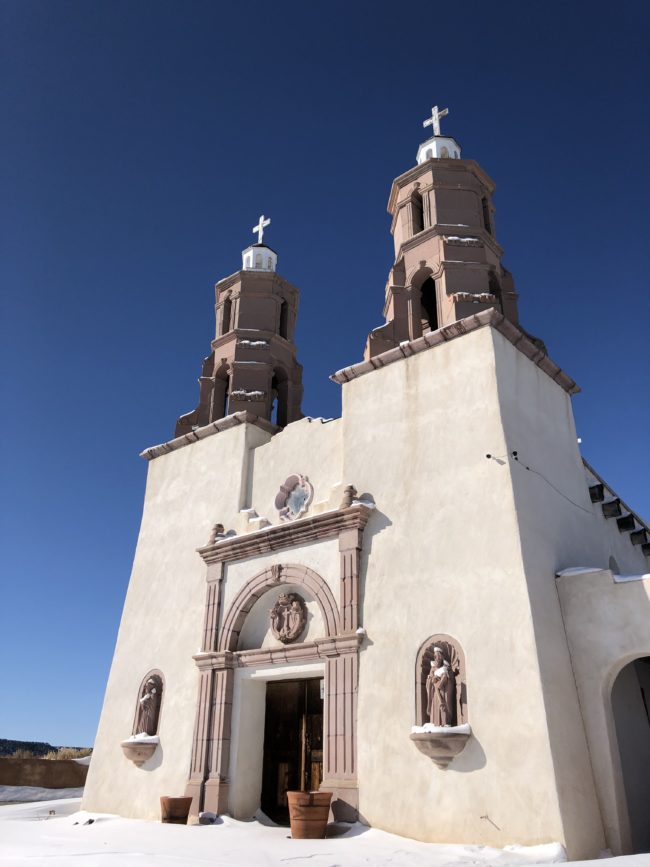 Finally, we circled around to try to enter the shrine, which is in a Spanish Colonial style, (in honor of the local ancestors,) but it was obviously locked on a snowy morning. 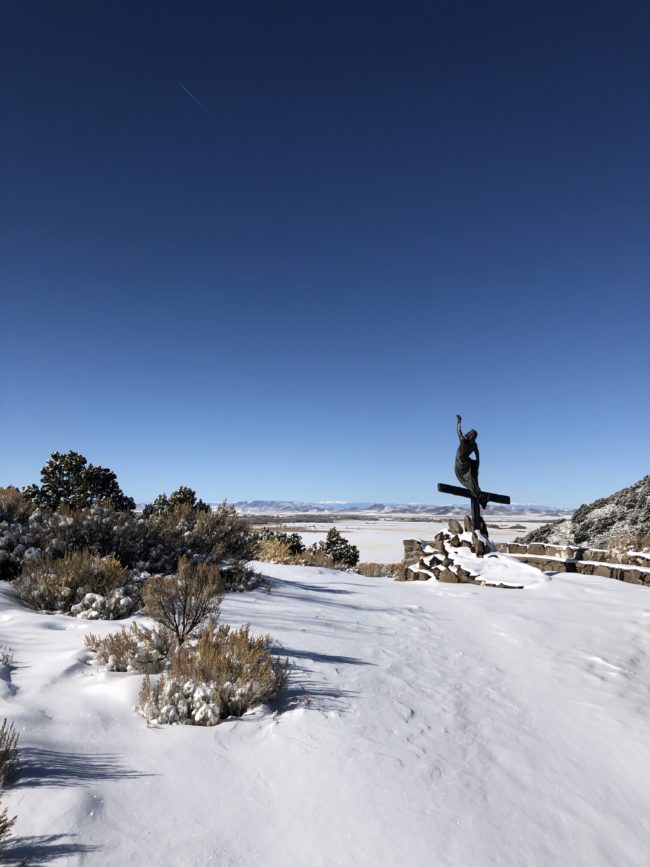 So down we went, occasionally pausing to take in the Sangre de Cristos to the East, and the Conejos Mountains to the West, with the sun burning happiness into our cheeks. 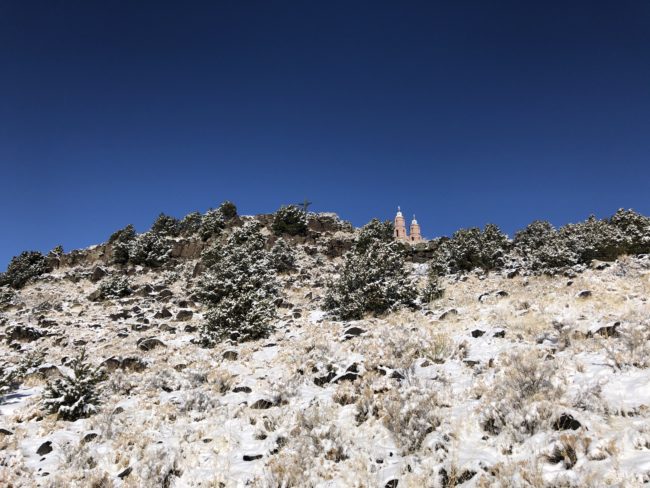 If you’re coming to Taos, or Santa Fe, or Southern Colorado, I can not suggest this place more highly.

(And I didn’t even get into the Shrine.)

The strangest part, if you ask me, the one that ties this tale together, across the Millennia, is that I would have bet anything the chapel, La Capilla de Todos Los Santos, was built in the 19th Century.

Taos families pushed North into the San Luis Valley in the 1840’s, and the town was officially founded by those Spanish Colonial Catholics in 1851.

But it was a town made of dirt back then, at the edge of nowhere.

(I guess I didn’t think it through.)

So my research turned up that it was built, as an offering of peace and love from the San Luis parish, in 1986!

Are you kidding me?

The post Considering the Crucifix in the Wild West appeared first on A Photo Editor.